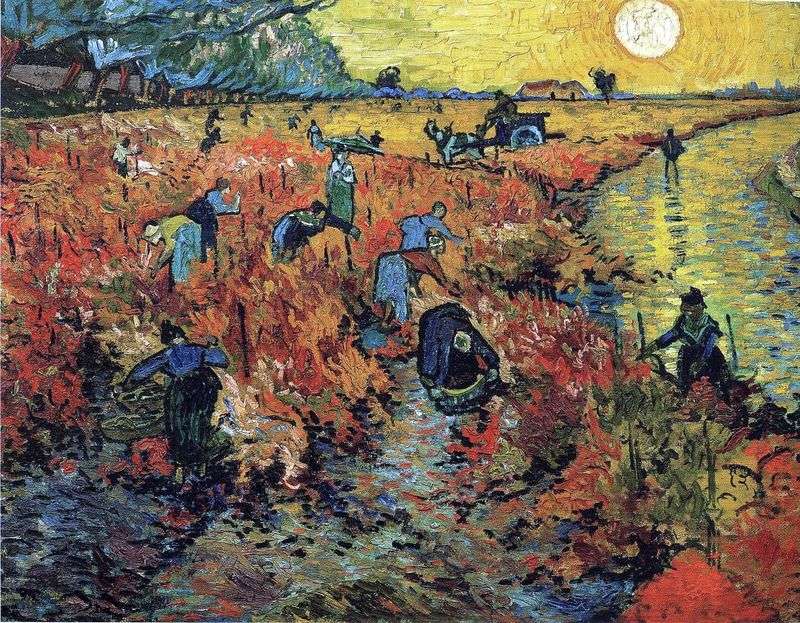 The famous painting “Red Vineyards” Vincent van Gogh wrote in the south of France in the town of Arles, it was there that the magnificent Mediterranean nature inspired him to create masterpieces. Seeing the October day as local residents collect ripe grapes of deep red, the artist was so impressed by the riot of autumn colors and the symbolism of the action that one of his most famous paintings wrote in just one month.

Harvesting is a symbol of the cyclical life, being, and the sun for the artist always meant life and its flowering. In this cycle of life, Van Gogh also inscribes man in labor and movement.

The artist divided the composition of the picture into two complementary plans: on the front people gather grapes, in the back one can see the figure of a man on a cart and trees.

Although the autumn, but still hot sun, as if melting everything that is depicted in the picture: people, trees. This effect is achieved through the use of a special smearing technique, which van Gogh mastered perfectly. The use of special colors creates simply an incredible color scheme that fills tightly with inner light and life. Van Gogh does not use color mixing, contrast strokes, and mostly uses warm tones, leaving the shadows cold.

In general, the picture leaves an impression of the early Vincent van Gogh with his desire for impressionism. The canvas “Red Vineyards” changed its owners several times until the Soviet government nationalized it and transferred it to the Museum of New Western Painting, and then to the Pushkin State Museum, where it still is.