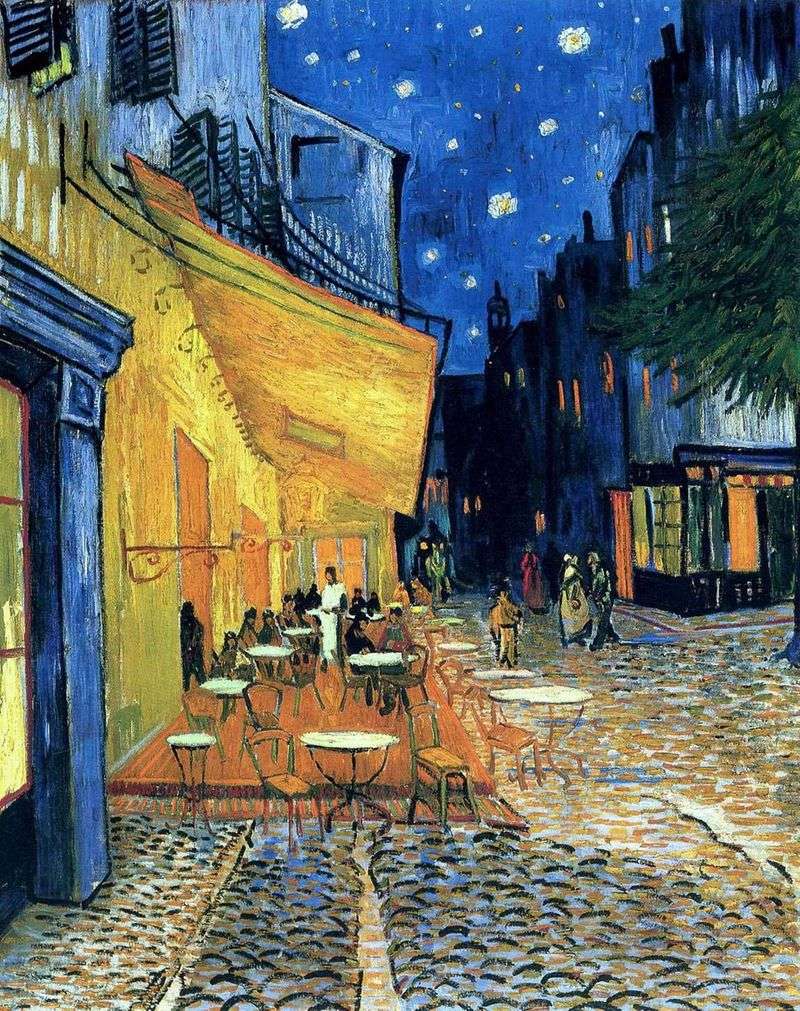 Terrace Cafe Night, Vincent Van Gogh, is considered one of the artist’s most remarkable works. She, too, undoubtedly belongs to the most famous paintings of Van Gogh, written for his short but fruitful, creative career.

This first work from the trilogy of paintings depicting the starry sky. The Starry Night over the Rhone Rhone was written a month later, and after it, a year later, Van Gogh wrote Starry Night, during his stay in Saint-Remy. With these three paintings echoes Portrait of Ojen Bosch – pay attention to the stellar motif in the background of the picture. Vincent really liked the idea

of ​​writing a Terrace cafe, and he told this in a letter to his sister Wil: In truth, I digress from all the other matters and now I’m working on a new picture depicting the outer part of one night cafe: the tiny figures drinking on the terrace people, a huge yellow lantern illuminates the terrace, the house and the pavement, and even gives some brightness to the roadway, which is painted in pinkish-violet tones.

Triangular pediments of buildings on a street in the distance under a blue sky, strewn with stars appear dark blue or purple, and there is still a green tree. Here is a night painting without black, written only in beautiful blue, purple and green, and the illuminated area acquires a light-gray and greenish-lemon color in this frame. I really like writing the night right on the spot. Previously, they painted and painted a picture in the daylight with a crude rough outline. I’m pleased to draw right there.

Next Vincent tells Ville that the description of such a cafe is in the book of Guido Maupassant. Lovely friend: “… the sunny night in Paris and the brightly lit cafes on the boulevard is about the story that I draw.” The works of Van Gogh were often inspired by literary works and paintings by other artists. . Terrace Cafe is similar in style and composition with the picture of Anqueti Avenue de Clichy in the evening. Regardless of whether Van Gogh was directly inspired by Anquet’s work, Terracesy Cafe’s composition is unique among all his works.

Pay attention to the fact that the composition lines are focused in the center of the picture, where the horse and crew are located. It seems that everything swirls inward like a whirlwind, however, in general, the mood of the picture implies peace and tranquility. The overall impression of darkness is achieved without a hint of black color. Vincent wrote the Terrace of the Cafe over a hundred years ago, but it still operates in Arles and serves drinks with thirsty customers. Now it is rightly called Cafe Van Gogh and looks, after the appropriate repair, as a hundred years ago – a yellow canopy overhang and stuff. In 1995 in Arles, I stopped at this cafe to drink cognac and thought about Vincent, so close, working under the stars, feverishly and, at the same time, at peace.