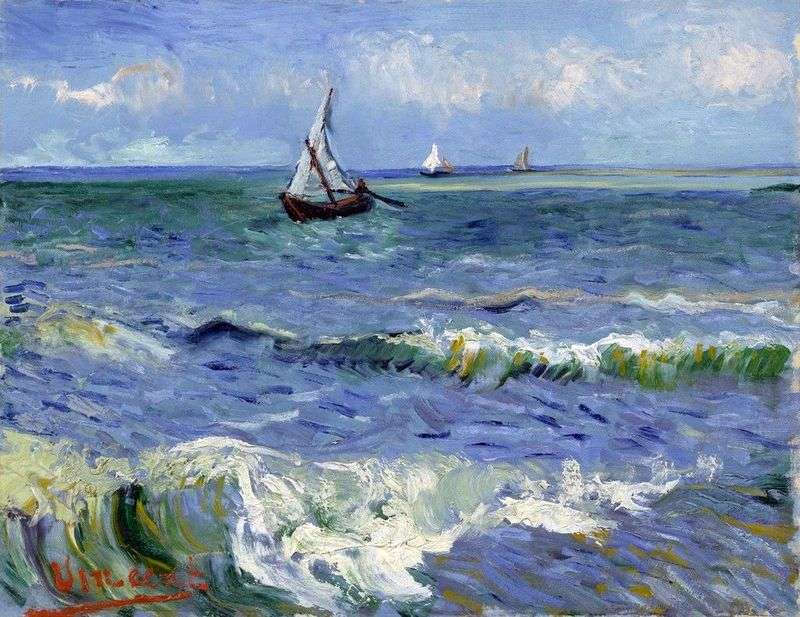 Boats in the sea

The painting “Boats in the Sea” was written by the famous Dutch artist Vincent Van Gogh in 1888. To date, this canvas is stored in the museum of the artist in Amsterdam. The painting is painted with oil paints on canvas.

Many of his paintings the artist wrote in the technique of Impasto – thick and massive brush strokes, mainly used to better transmit light in the paintings. This technique allows you to make images more voluminous and more expressive. The painting shows a simple view of the sea.

In the foreground, huge dark waves splash, they look dangerous and change the mood of the viewer, making him afraid and nervous. The artist was able to make a simple small storm of a special meaning, affecting the consciousness of people. Also, the sullenness of waves complements their color performance, they are written in contrasting colors.

Van Gogh depicts threatening waves in cold colors, catching up with anguish and anxiety. Waves are the key object of the whole picture, so they occupy most of it, showing that they can not escape from anywhere, since they are everywhere. The troubled sea symbolizes a difficult period in the artist’s work, as well as in his general state. In the plot of the picture you can catch his indecisiveness and doubts.

In the sea, several small sailing boats are also depicted, which smoothly and quietly plow the sea. They float to the horizon along the dark sea, and above them a clear and calm sky spreads. These boats resemble birds, consisting of one flock, who deftly cope with distances and difficult roads, while being able to not separate far from each other. If you carefully consider the picture, you can see that all the boats are floating at one point.

There is an opinion that this Van Gogh wanted to show that despite all the difficulties of his life, he does not give up and still continues to go to his goal. Each boat symbolizes a small stage in its progress towards the desired result, which is far beyond the horizon.