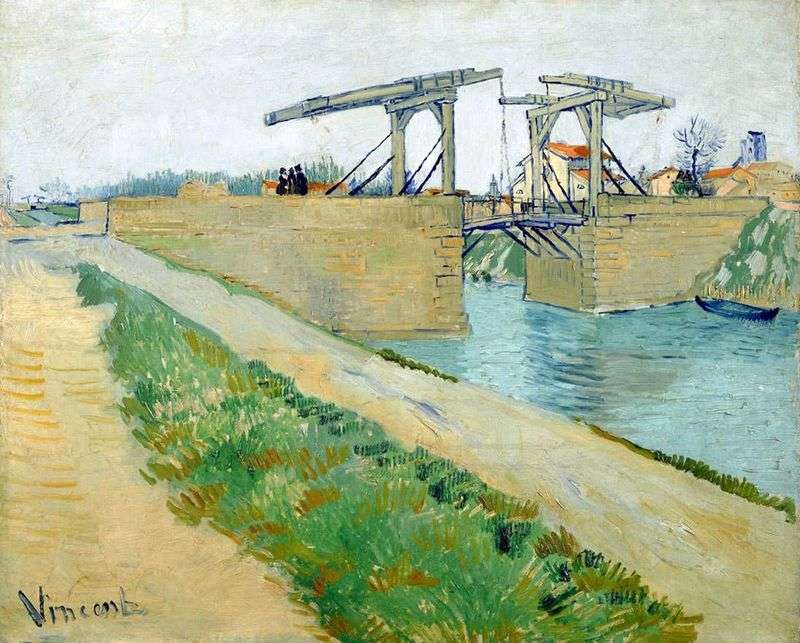 Soon after moving to the south, Van Gogh creates a series of paintings depicting a bridge over the canal in Arles. Officially this structure was called the “Bridge Reginal”, but the locals once began to call it by the name of the caretaker Langlois, since then this name has entrenched it. Van Gogh wrote the bridge in a different manner, with different lighting and the state of nature.

This landscape, the third of the series, differs from the rest in relative simplicity of performance. As Van Gogh wrote in his letters, this work he wanted to convey the spirit of the nature of Provence, which sometimes, strangely enough, reminded him of Holland.

Perhaps, therefore, the artist paints a picture in cold gray-blue tones, which were almost uncharacteristic of the solar nature of the south. Only in the foreground the color palette acquires warm ocher colors. A wide path, which extends into the distance, and the green grass are written quite generalized.

The artist paid all the attention to the bridge, depicting all its features and details. Van Gogh was good at conveying the materiality of the individual parts of the structure: it can be seen that the large beams are constructed of wood, the base of a heavy stone, and the ropes with which the mobile part rises, were once painted red. Now this work is stored in the Van Gogh Museum in Amsterdam.