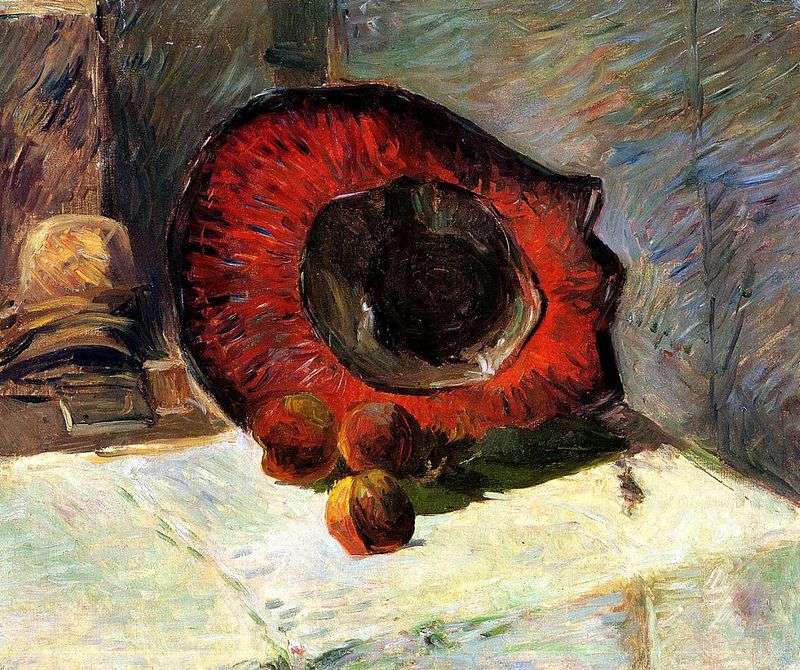 Still life in the work of Paul Gauguin is of special interest for art historians. Since the artist did not often work in this genre, each of his still life is a creative experiment. Still Life “Red Hat and Fruit” refers to the early period of the painter’s work. According to the technique of execution, the picture resembles the works of Van Gogh, for which a vibrating smear is characteristic.

On the table, laid with a white tablecloth, is a red hat and three peaches. The whole environment is lit by a bright sun, which creates clear shadows on a snow-white background. The hat is located inside

the viewer, which gives a bizarre image to the headdress, and does not immediately realize what is depicted in the picture.

More hat reminds the open fire poppy flower, attracting the eye of its black heart. Radially divergent red strokes on the fields of the hat convey its shape. Red and yellow peaches are also like a fire. Gauguin beautifully created a cut-off modeling of the shape of fruit. On contrast to red objects, the artist writes a green shadow.

The background is written by moving flickering strokes of different shades. All the space around the still life seems to be moving. When the eye of the viewer looks at the rhythmic arrangement of these strokes, he perceives the fussy movement of the whole environment.

It seems that the artist quickly worked on creating a picture. The painting “Red Hat and Fruit” is the beginning of Gauguin’s creative successes in the genre of a still-life, which will receive special development in the work of the painter.