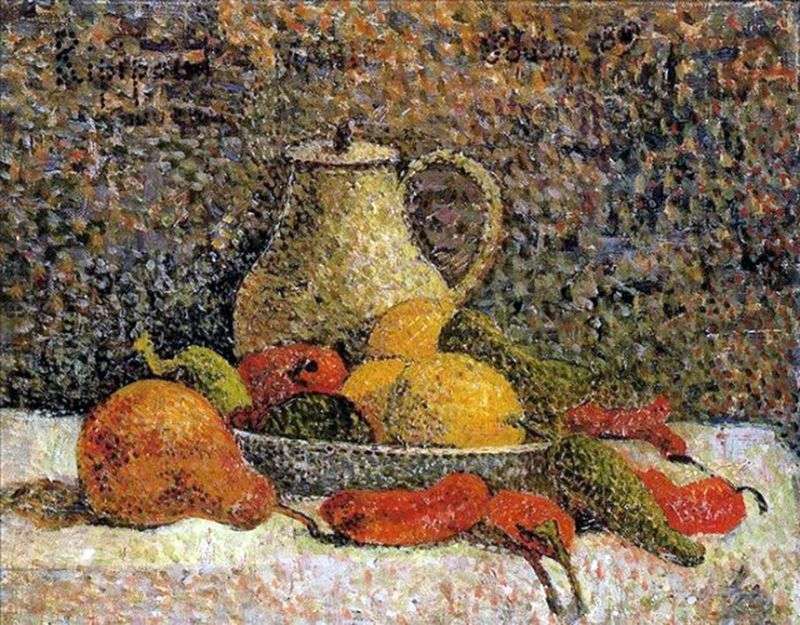 The end of the 19th century was a period of many still lifes, each of which is original. The artist completely departed from the classics and rules. It is evident that there is no complete reasoning, a random storyline is immediately transferred to the canvas. Full attention is paid to the subjects, the play of light and shades. In the foreground is a light jug, and in front of him is a plate full of various fruits.

The table is made of milky color with a tablecloth, in the tone of which there is a plate, as if merging with a jug. On the table, apart from all the fruits, there are exotic fruits that differ in color from appetizingly written pears. The picture is depicted with a pronounced combination of color contrast. Lying in a plate of yellow pears, stand out clearly on the cold background of the table.

The artist very subtly emphasizes volumes, shadows, glare, reflections. All these little things are very well worked out by the author. It seems to be simple objects, presented in an unusual simplicity and, along with it, in beauty. Fruit is a bright spot in this work. Gauguin speaks of a sincere attitude toward work, he calls not to the copying of nature, but to painting, as an expression of thought. He describes the still life deeper than just the fruits that stand on the table.

At the same time, the artist in the picture shows his art, his ability to create. Describing still lifes, he put his dreams into the pictures, shifted to a game of color, to the perception of the world as a whole picture.