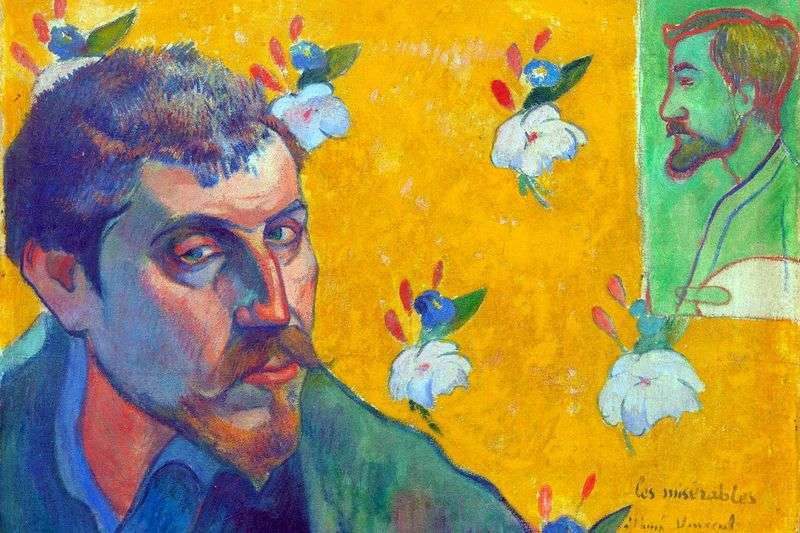 Every artist has a self-portrait – this is the favorite genre of all painters. The work of Paul Gauguin is no exception. Given the extraordinary thinking of the artist, all of his portraits have a peculiar character. “Self-portrait” Les Miserables “” is dedicated to Vincent Van Gogh and was written before Gauguin’s trip to Arles.

Between the painters was an unusual game – a competition that began even earlier with the writing of Emile Bernard self-portrait, with a portrait of Van Gogh, depicted on the wall. The portrait was donated to Van Gogh, who decided to create

in Arles artel of artists.

Artists began to conduct a lively correspondence, in which they discussed a new period of their creativity. In the process of such communication, Gauguin sent Van Gogh a self-portrait with Bernard in the background, and Van Gogh wrote a self-portrait in the image of a Buddhist monk dedicated to Gauguin.

An interesting fact is that Van Gogh placed his self-portrait on the same background used by Gogen. And the image invented by Van Gogh made it clear to Gauguin that he would do everything possible to implement his plans. In addition, he noticed that Gauguin in his portrait looks a little desperate and to support his comrade, he decided to show his serenity and determination. But in the self-portrait of Gauguin the mood was completely different. And the title “Les Miserables” refers us to Jean Valjean, the protagonist of the novel by Victor Hugo.

Valzhan was a former convict with a difficult fate, and the artist, who represented himself in the role of a rebel, for whom there is no life in bourgeois society, wanted to strengthen this effect in his picture. His portrait image he placed on the left, which is an unconventional technique in painting, part of his face is lit, and some are in the shade, speaking of the contradictoriness of his nature. His stare with squint looks directly at the viewer. Contrasting drawings on a yellow-orange wall – a decorative element in the picture, which stands out more painterly painted portrait of the artist. The painting “Self-Portrait” Les Miserables “” is a challenge for Van Gogh for the accomplishment of great deeds, which is the beginning of a new creative path for artists.