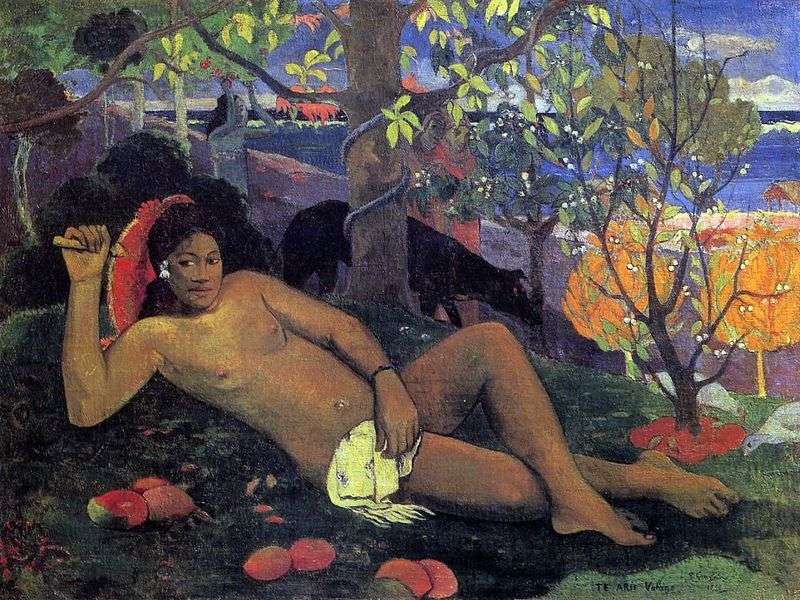 The work of Paul Gauguin’s “The Wife of the King” is considered by many art critics to be a unique pearl among the famous nude maidens of European art. “Nude Maja” F. Goia, “Olympia” E. Manet, “Sleeping Venus” Giorgione and many other similar works glorify the beauty of women’s bodies in different ways, according to the aesthetics of their time and place. His contribution made and Gauguin – many of his paintings depict nude women, but his ideals of female beauty, the artist chose exotic Tahitians to present them to the whole world.

King’s Wife” appeared almost at the end of Gauguin’s creative and life path. The painter himself was pleased with his painting, which he did not fail to mention in a letter to his friend Daniel de Montfreide. Gauguin claimed that he considered this work better than previous similar canvases.

Spread freely on the ground, or rather, on a green carpet, a young Tahitian maiden looks at the viewer, sheltered by the shadow of a tropical tree. In her hands, you can notice a traditional fan – this attribute of Gauguin gives to your heroine not for the first time, it is enough to recall the portrait of Tehura, the young Tahitian artist’s wife.

The king’s wife feels free and relaxed – Gauguin seemed to specifically demonstrate the lack of modesty of the inhabitants of Polynesia, considering all civilization to be evil, and a free attitude to nakedness as a manifestation of freedom, purity and naivety of the islanders.

The main character instantly captures her gaze and does not immediately see the other heroes of the presented plot – a young servant tearing off the ripe fruit from the trees for her mistress and two old people, almost merging with the surrounding landscape, who talk about the “tree of knowledge.”

Exotic and picturesque landscape of the picture can not but cause admiration – the abundance of colors and greens, colorful trees and blue-blue coast.

The size of the picture is 1 m at 1.30 m. With the characteristic sensitivity only of Gauguin, the master organized a color scheme of work – bright colors, a rich palette, devoid of halftones, clear contours, a canvas with colorful stained glass.

Today, this delightful work of the great Gauguin is in Russia and belongs to the Pushkin Museum of Fine Arts.