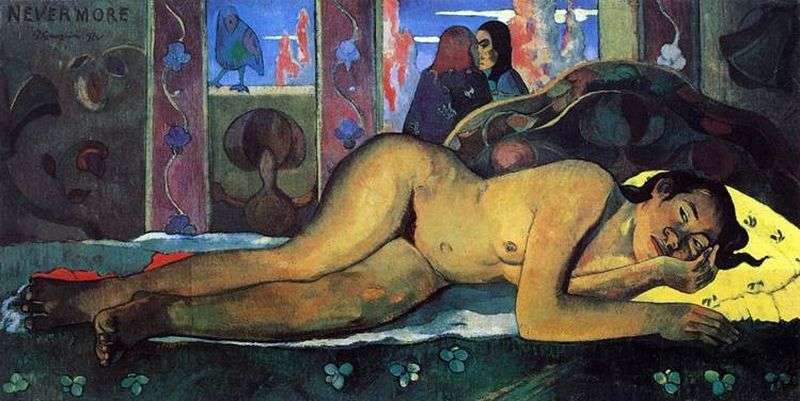 Nevermore – one of the most famous paintings of Paul Gauguin, he wrote in Tahiti in 1897. Stored in the Courtauld Institute of Art in London.

The painting is a variation on the theme of “lying naked”: Tahitian naked girl lying on the bed and rich, it seems, tensely listening to something. In the background you can see the doorway in it – two people talking; in the upper left corner of the picture – the inscription «Nevermore» the artist’s signature, and next – a black bird.

Some scholars see in this line and the black bird reference to the most famous works of Edgar Allan Poe – “The Raven.” Indeed, in the poem there is a line where the raven utters a phrase that coincides with the name of the picture.

Matured in an unnatural, gloomy colors, the painting evokes more anxiety than lust. Woman lying on bed, looking alarmed; she does not look at the crow, not a conversation in the next room. The writing style – thick brush strokes, bright, expressive colors – as if anticipating creative expressionists.

Radiographs showed that «Nevermore» was written on top of another picture.

On the deepest sense of the picture one can argue long and hard, and engaged than many critics and scholars of Paul Gauguin. But the master himself claimed that the most valuable product that was not fully expressed. That is why any picture Gauguin, particularly his work Tahitian period with software titles may have more than a dozen different interpretations.

Today, thanks to the X-ray, it is known that the painting “Never again” was written on top of another picture.