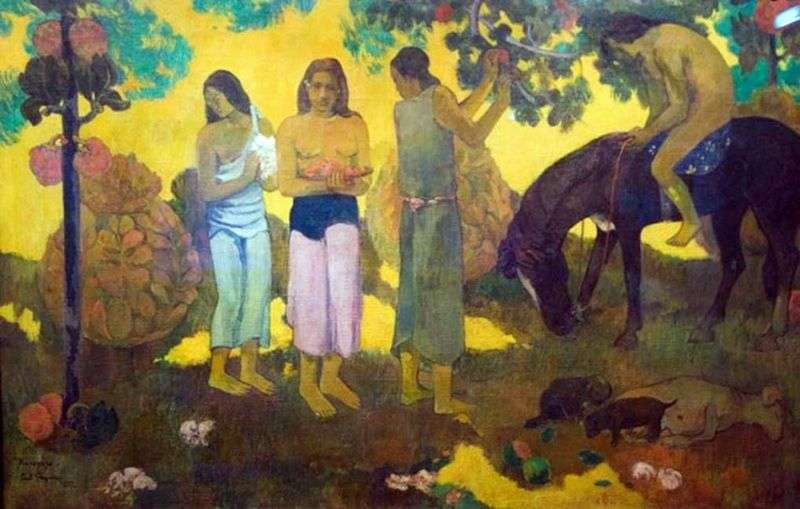 Paul Gauguin’s widely known work “Harvesting”, written by the artist at the end of life, when he lived on the island of Tahiti. Many researchers of the great post-impressionist creativity interpret this work differently.

The main version of the interpretation of the idea of the painting “Harvesting fruits” is that the artist symbolically depicted two principles: spiritual, celestial and material, earthly. The canvas is visually divided into two halves: the left one, where the artist depicted women with various colors and fruits, symbolizes heaven, paradise. The right part of

the picture, where we see a rider riding a horse, a dog with puppies, a man tearing fruit from a tree, tells about the human fall and the life of people on material land.

Coloring the painting “Harvesting fruits” is characteristic of the work of Paul Gauguin: he uses bright colors, creating a feeling of a sunny day, while not depicting either the sun or the sky. In addition, despite the rather schematic display of the characters in the picture and the features of their faces, the artist gives a clear idea of the characters and the impressions that are created.

The left part of Gauguin’s painting “Gathering fruits” leaves a feeling of peace and quiet joy, while the right one worries and disturbs a lot, making you think about the finitude of being and the inevitability of death.

Paul Gauguin’s paintings are always filled with a special meaning and emotions. Everyone has even the smallest detail. Confidence lines, special colors, expressive manner of writing put his work on a par with paintings of the greatest artists of all time.