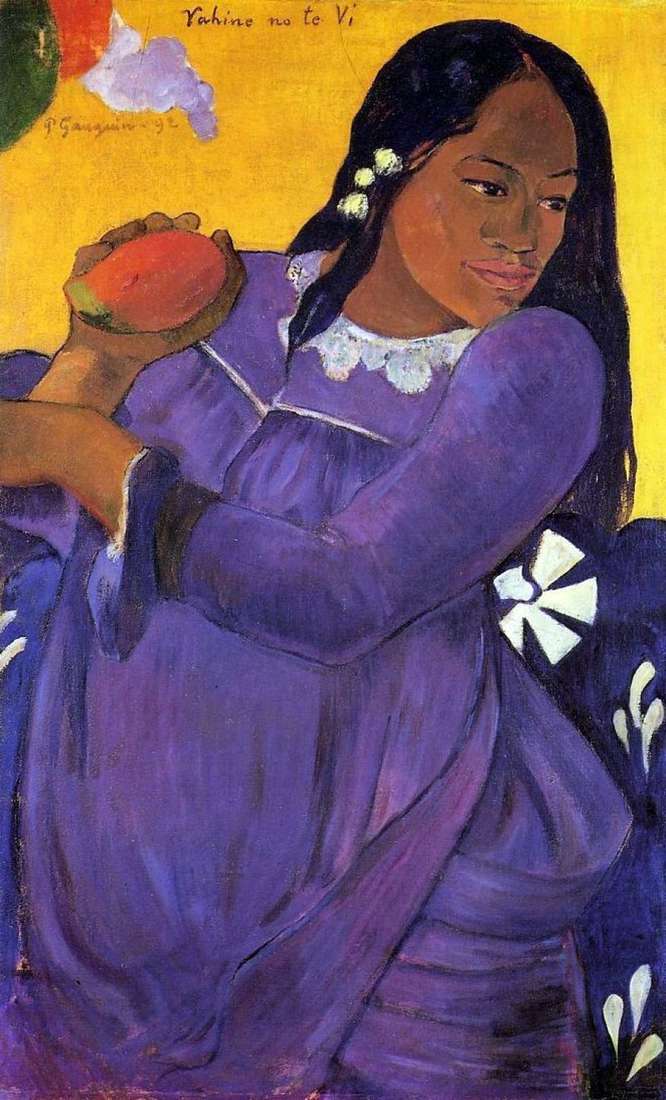 The picture is the most sensual embodiment of the wife of Gauguin – Tehura. “Vahine but those vie” – brought out his hand painter name of the canvas in the Tahitian language.

This time, Gauguin did not begin to portray his wife in the nude – her figure is completely closed behind a bright violet missionary dress.

Attentive and curious viewers may think that here the girl is in the last month of pregnancy, and will be partly right. Tekhura was really waiting for the child, but the natural physiological changes had not yet reflected on the figure of Gauguin’s wife

– too short a time. And in the mistakes of those who see the canvas, they are fully justified – in a very wide voluminous gown “put on” Gauguin his model. This desire to get ahead of events will later be taken over from Gauguin by Pablo Picasso.

Lilac color dominates the canvas, filling three-quarters of its space. Extremely appropriate on the background of this color are bright elements in the form of snow-white floral patterns. Tehura itself looks very beautiful – black luxurious hair is tinted with decoration, white collar highlights the swarthy complexion.

The painter, perhaps, was not so right, anticipating the events – he was not destined to see how Tehura was nursing the last months of pregnancy, he did not become a witness to the birth of his son. In 1894, he returned to Paris for a short time, leaving his young Tahitian wife, and when he returns, Tehura will already be married to a local young man, and his son will grow up in this family.

All subsequent cordial attachments in Oceania will not be as strong as the love for Tehura thrown by them – they will not bring him any happiness, nor a new muse, which he would often depict in his canvases.

The picture “Woman with a mango fruit” will subsequently be acquired by Degas.