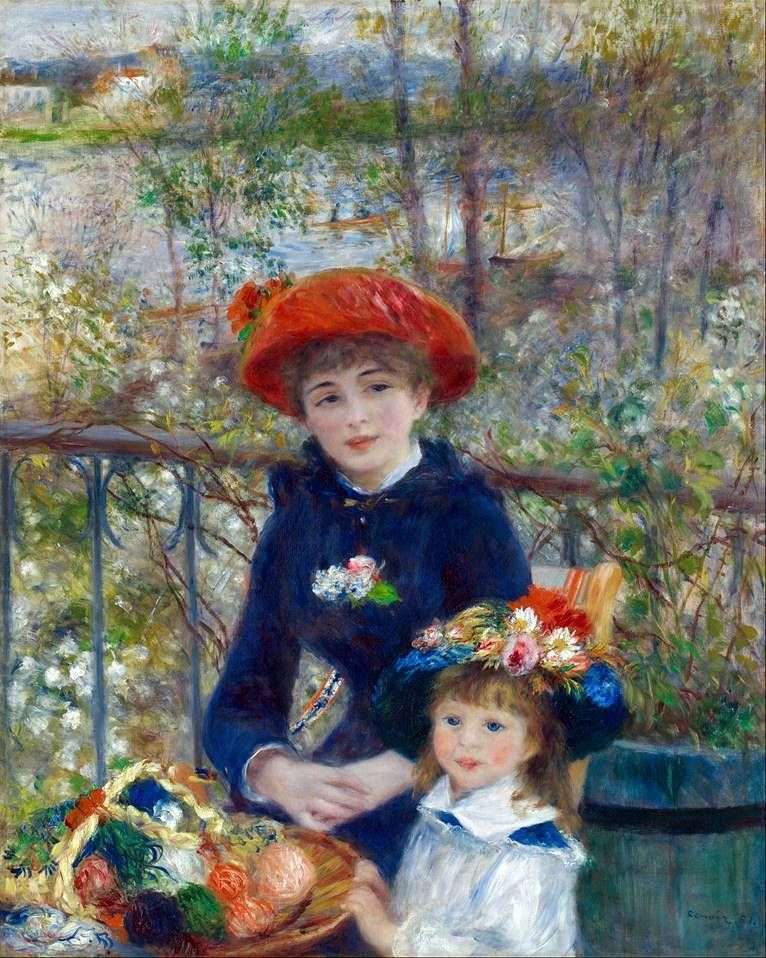 Renoir was distinguished by constancy to his favorite places and landscapes. One of these places was the family restaurant House Fournesa, in which the painter liked to visit. A number of portraits, Breakfast of the Rowers and Two Sisters were written here.

The picture has a double name – “Two Sisters” and “On the Terrace”, and in fairness, it is worth noting that these names should stand that way. The first name gave the picture itself Renoir, when he finished the work, the second name “On the Terrace” was invented for the canvas by its first owner Paul Durand-Ruel, a collector and patron of the French Impressionists.

For the background, the master chose the picturesque terrace of the House of Fournaise, from which a beautiful view of the Seine was opened. Along the railing Renoir portrayed two sisters. The artist wrote from life and today it is known for certain that in life two models were not related relatives. Zhanna Darlo, the future actress who is only 18 years old, is still far from fame as her older sister. Later, her star is short-lived, but it will burn brightly on the Comedy-Francaise sky, and even later it will become the kept woman of a chocolate manufacturer, never having married. The name of the little girl, the younger sister, like any other information, the story is not preserved.

Renoir spent 4 months to create the work. It is known that the year before the painter had already tried to depict a girl in the same scenery, but the model was devoid of charm, although it was distinguished by good looks and fragility. A year later, Renoir decided to try again, complicating the composition and plot – now it’s a double portrait, where landscape takes an important place. The artist’s letters to the critic Dure have survived, where he complains that he is fighting with flowers and trees, with a portrait of women and children, speaking of his new work.

Indeed, looking at the picture, one can only wonder how thoughtful the details are within the artistic space of the work. The main hero of the picture is not any of the sisters, but the light. The light, which plays in the colors of flowering trees, is reflected in the water surface of the river, with a sunny bunny jumping on the hat of the eldest of the sisters, illuminating the soft, pretty features of the faces of the heroines. Thanks to this light, the whole picture is replete with bright colors and “breathes” with cheerfulness.

Creating his work, like any other, the master focused primarily on painting than on the authenticity of the content. Color, light, harmony were the main components, which is why, so organically, there is a basket with threads in the sisters’ knees, although according to the content of the canvas, this element is illogical, as if the girls were imprinted in the interior.

The remarkable canvas was in the hands of three famous collectors – Durand-Ruelle, Ephrussi, Coburn, until it was bequeathed by the last to the Art Institute of Chicago.