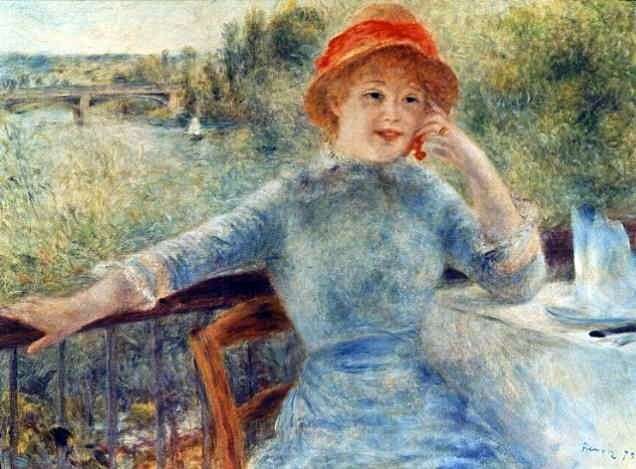 In 1879, Renoir painted a portrait of Alfonsina Furnes, which is located in the Louvre. This portrait as it connects the works of Renoir 1879-1881, created on the Seine, in Chatou, in the restaurant of her father. And the great work “Breakfast of the Rowers”, which, among others, depicts Alfonsina, completes this theme and the “boat” views of the Seine, and on a larger scale draws a line from the impressionistic period in the works of Renoir.

Further, under the influence of internal doubts and hesitations, trips to Italy, Renoir will change his painting style and will work differently. “Big bathers” will mark the top of this turn in the work of Renoir.

In the meantime, Renoir presented Alfonsina Fournaise sitting on the veranda, behind which Seine smoothly runs among the flowering greenery of the coastal plants. Her face is smiling and serene, and the light blue dress is written in such a way that you stop feeling the density of the girl’s figure, and you only perceive the beautiful and shaky texture of the paint layer, saturated with infinitely various shades, merging into a common light blue color.

It is possible that in the future this will no longer satisfy Renoir and will lead him to new searches: the colorful surface of the figure depicted ceases to convey the material tangibility of volumes and shapes.