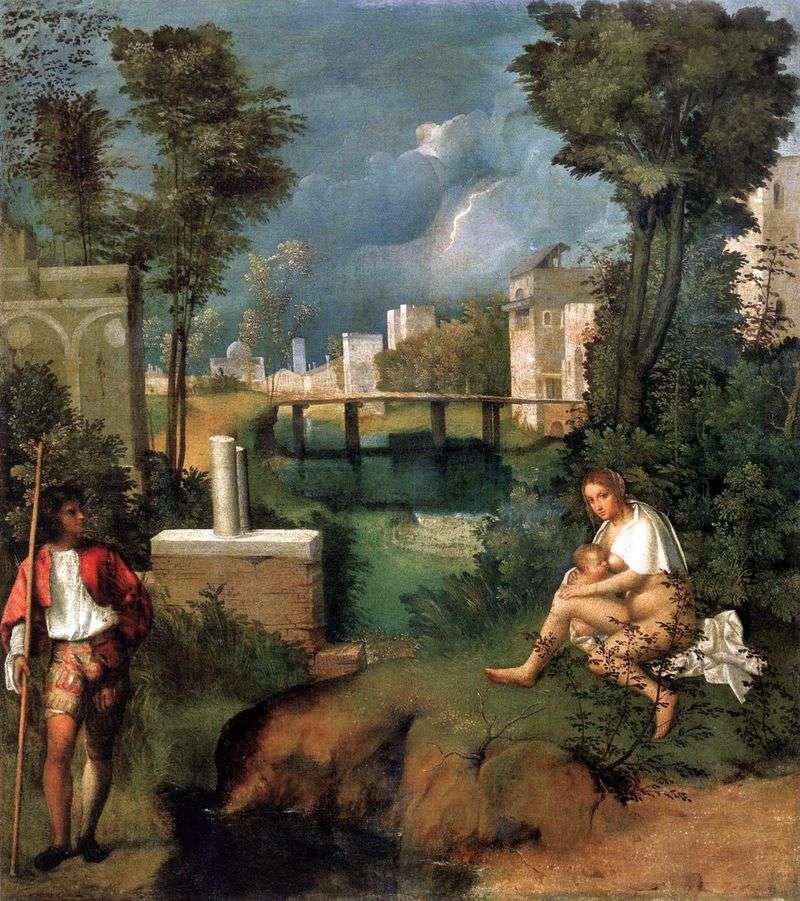 The famous “Thunderstorm”, stored in the Venetian Gallery of the Academy, has long attracted the attention of researchers both with its mysterious plot, and with the treatment of the rural landscape.

The characters of the picture – a young man with a staff in his hand and a young woman with a child – occupy a place in the foreground, and further, among the trees, there are urban buildings – towers and houses. A bright flash of lightning cuts the sky, casting a reflection on the crowns of trees. The ruins of ancient buildings and the bridge complement the composition of an unusual picture.

What is still depicted here? To this question, scientists have been trying to find an answer for almost a hundred years, but so far there has not been a single convincing explanation of who the characters are and what they do in the middle of the countryside. Yes, and the contemporaries Giorgione content of his paintings was, apparently, completely incomprehensible. The indefatigable Vasari, who visited Venice half a century after the death of the master from Castelfranco, complained that no one can explain to him their true meaning.

As the roentgenogram of the picture showed, the figure of the young man in the lower left corner did not appear right away, but was added later, during the processing of the original design. Indeed, with his somewhat bravura appearance and bright apparel, this character stands out prominently on the general background. This suggests that it is here that the key to understanding the content lies. Who is he? During the XVI century it was defined as a “soldier”, images of which are often found in Venetian painting of the early 16th century. Even less it reminds the rural shepherd, although in his hand he has a shepherd’s staff.

In fact, this young man is a character from a different world, far from rural life and pastoral care. His costume is an expensive jacket made of purple cloth and trousers, a fashionable short hairstyle makes it possible to see in him a person belonging to an aristocratic circle: apparently, it is a courtier or a page. He – a city dweller, perhaps from the same city, whose buildings are visible in the distance. So in the Venetian art appears a new image – the image of a city dweller who left his usual urban environment and went out of town, into the bosom of rural nature.

And nature in the picture of Giorgione is also seen through the eyes of the townspeople. There are no traces of human activity or peasant labor in it. The only purpose of this nature is to serve as a resting place for the heroes of the painting, and in accordance with this the artist chooses the main landscape motifs. There is a small creek, grass and shrubbery grow in abundance, and thick thickets of trees cover this peaceful corner from storms and storms raging over the city in the distance.

Idyllic rural nature appears in the picture as a safe refuge, where silence and peace reign. At the same time, it is full of associations with the ancient past – this is said by classical ruins – and is inhabited by mythological characters, such as a naked nymph with an infant.