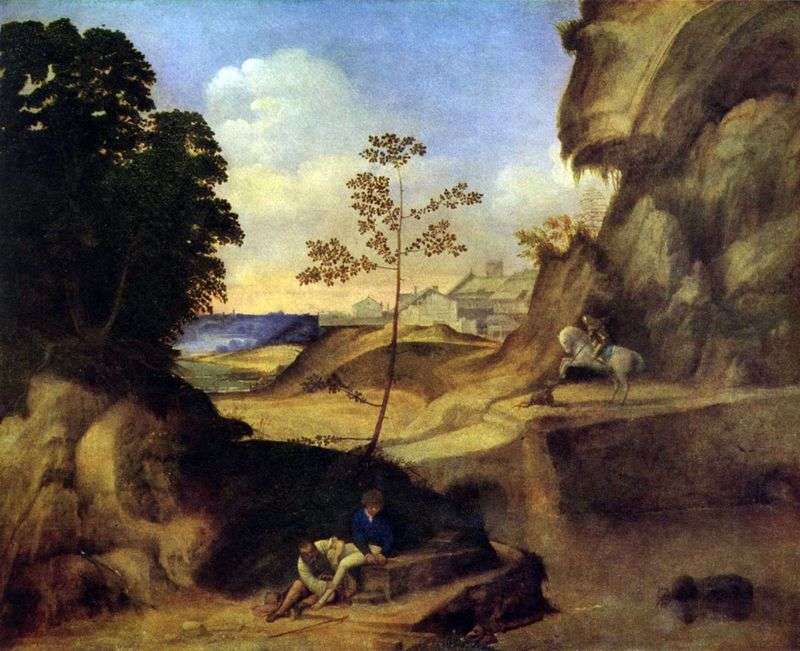 Landscape “Sunset” was created by the Italian artist Giorgione after 1506. The size of the picture is 73 x 91.5 cm, canvas, oil. Since 1505 the period of creative maturity of the master begins, soon interrupted by his deadly illness. During this short five years, his main masterpieces were created: “Judith”, “Groza”, “Sleeping Venus”, “Concert” and most of the few portraits.

The fresco in a damp Venetian climate very early discovered its instability. Thus, executed by Giorgione with the participation of the young Titian, the frescoes of the German courtyard were almost entirely destroyed. Only a few half-flowered, spoiled fragments of fragments survived, among them the figure of a naked woman, complete with almost praxitelevian charms, executed by Giorgione. Therefore, the place of wall painting in the proper sense of the word was taken by the wall panel on the canvas, designed for a certain room and performed in the technique of oil painting.

Oil painting received a particularly wide and rich development in Venice, not only because it was the most convenient painting to replace frescoes, but also because the desire to transfer the image of a person in close connection with the surrounding natural environment, interest in realistic realization of tonal and the colorful richness of the visible world could be revealed with particular completeness and flexibility precisely in the technique of oil painting.

In this respect, the precious, with its large flowery, clearly shining sonority, but more decorative in character, tempera painting on the boards for the easel compositions, was inevitably giving way to oil, more flexible conveying the light-color and spatial shades of the landscape, which more gently and sonically molds the shape of the human body. For Giorgione, relatively little worked in the field of large monumental compositions, these opportunities, embedded in oil painting, were particularly valuable.