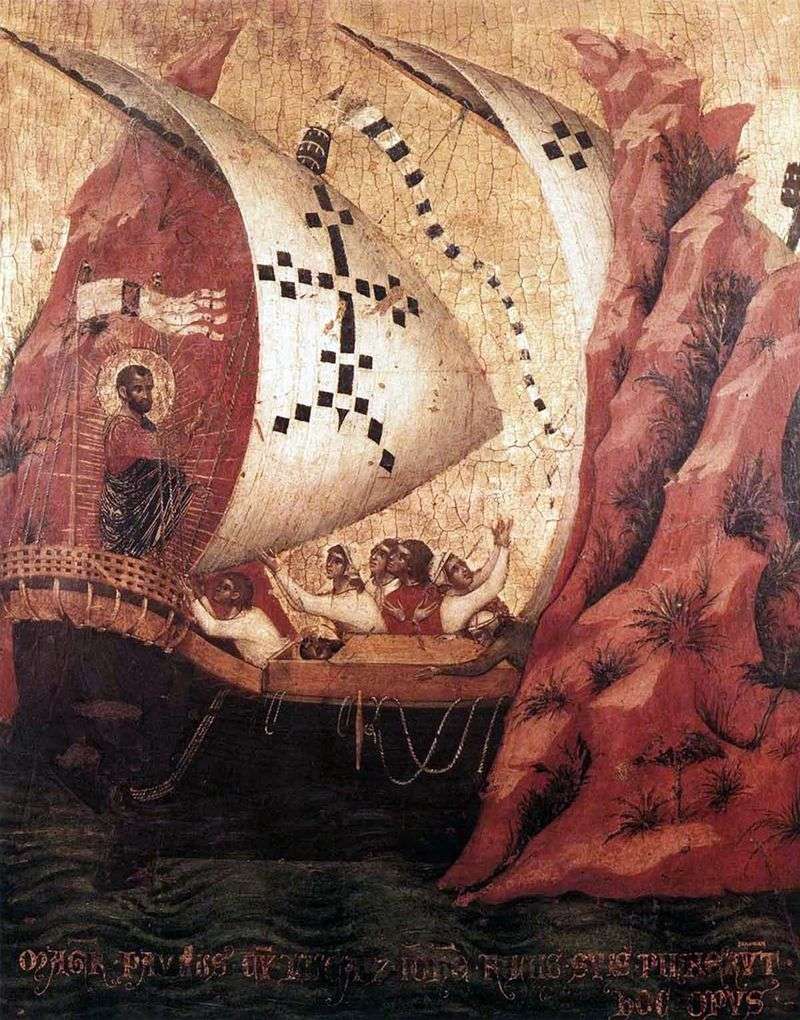 Paolo Veneziano was instructed to write a polyptych for the protection of the pearl of jewelry art created in the 12th-14th centuries. altar of the Venetian basilica of St. Brand, Pala d’Oro. The altar consisted of 14 paintings, which were placed in two rows. In the center of the upper row was the scene Vir dolorum, “on either side of it – six half-figures of saints.

In the lower row there were seven scenes from the life of St. Mark, patron of the Venetian Republic and the main cathedral of the city. The picture presented here depicts a sailboat in the stormy sea, on which a body of St. John is brought to Venice from Alexandria. Mark.

In response to the pleas of sailors, a shining figure appears on the deck. A brand that calms the waves. The dramatic nature of the scene is enhanced by swirling sails, fluttering flags and framing high cliffs. The figure of the saint, endowed with divine power, is not depicted in the center, but on the left, on the highest point of the ship, however, its dimensions are not increased. The image is enhanced by a high rock in the background and a tight arc of a white sail. Paolo Veneziano, in many aspects associated with the Byzantine art, it pays particular attention to the spatiality of the depicted.

A new feature in his Venetian art was the suggestive expression of feelings, the dramatic concentration, which replaced the narrative, and the pervasive picture of the dynamics. All this indicates the influence of the art of treccio, penetrated into Venice with the works of contemporary artists of Padua, Rimini, Bologna. The place of Paolo Veneziano in Venetian painting can really be determined by comparing this picture with mosaics of the 12th-14th centuries. from the Cathedral of San Marco, especially those created in 1260-1270. mosaics of the western facade above the gate, in which the same theme is developed.

The mosaic has a narrative character, emphasizes the horizontal direction, and Paolo Veneziano, following Giotto, thickens the events to the degree of drama. At the bottom of the picture, against the background of the sea, Gothic letters glittering with the name of the creator of the altar: MAGR. PAU-LUS CU LUCA. ET TONE FILIIS SUIS PINXERUNT “[This piece was written by master Paolo with his sons Luke and Giovanni”].