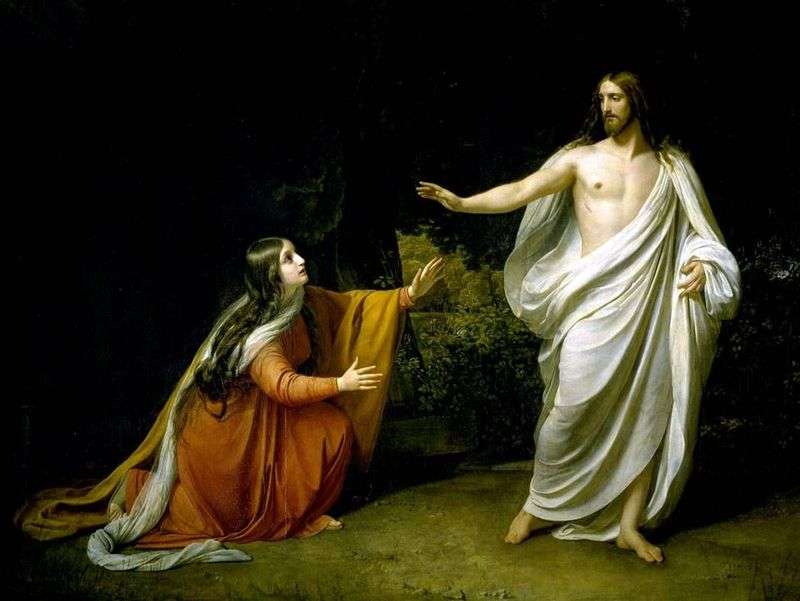 The famous artist of mythological and biblical subjects Ivanov Alexander before the creation of his grand unfinished painting “The Appearance of Christ to the people” tried his hand at writing the painting “The Appearance of Christ to Mary Magdalene after the Resurrection.” And although this picture was just a so-called rehearsal, it still deserves due attention. It was thanks to her that the author received the title of academician, and the picture was a huge success having gone to Petersburg.

The painting “The Appearance of Christ to Mary Magdalene after Resurrection” is distinguished by its simplicity and its grace. There are only two figures in the picture: Jesus Christ and Mary Magdalene. The plot is the Gospel episode of the appearance of Christ Mary. She was the first to see him risen. The painting shows the moment when Mary hastens to approach Christ, and he stops her with a calm gesture.

In a gesture, you can read the rigor filled with love. The author wants to convey an emotional picture. Maria’s face radiates a lot of feelings simultaneously. This is grief, and admiration, and excitement. A. Ivanov managed to convey the complexity and sincerity of Maria’s experiences. She is dressed in a bright red dress. Christ without clothes, but he covered himself with a white sheet. The prostitute repented of her sins believed in the power of Jesus Christ and became his follower.

And although the picture of A. Ivanov “The Appearance of Christ to Mary Magdalene after the Resurrection” is not the main achievement, it was she who placed the artist on a par with the best painters of the country. Looking at this picture, faith in miracles awakens, and remembering the story, you understand that even the most lost soul can be saved.