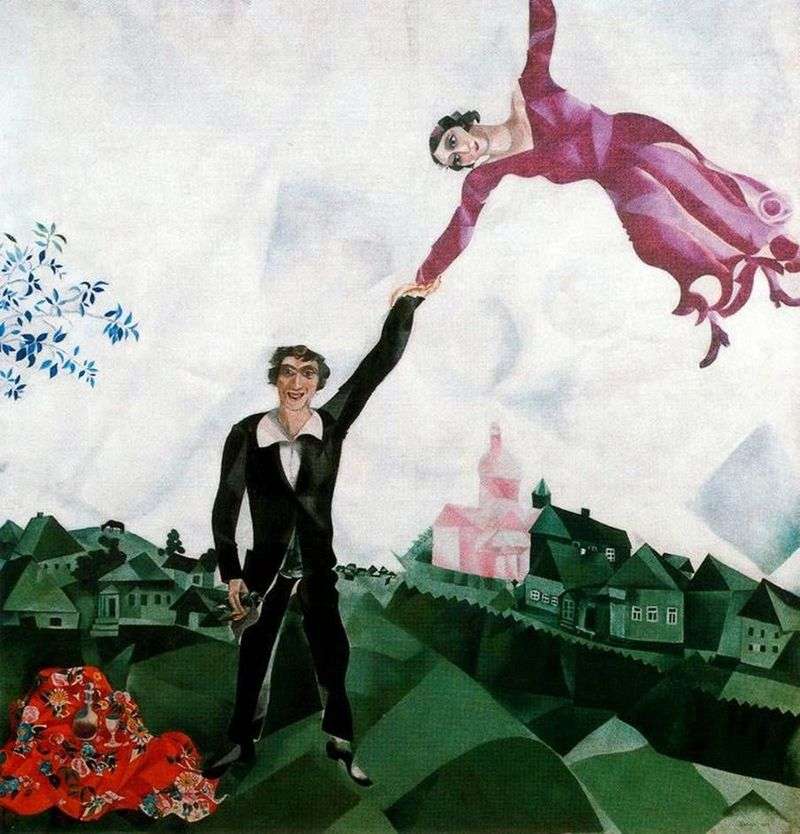 Marc Chagall is deservedly considered the founder of the avant-garde trend in twentieth-century painting. A special look at simple things and the original way of conveying your thoughts and ideas to the viewer made the artist truly a unique phenomenon in world culture. A well-known painting “Walk” occupies a special place in the work of Mark Chagall, according to many researchers, the artist depicted himself and his wife on it.

An inexperienced viewer, looking at the picture, may ask the question: why do the people whom the artist portrayed hover over the city, and do not walk on the ground like all normal inhabitants of the city? The answer is simple – the main force depicted in the picture is love, it is she who, inspiring a couple in love, makes them soar above the earth.

It can be seen that the two people depicted in the Chagall painting “Walking” – a man and a woman are happily in company with each other. Mutual love is the most beautiful thing that could happen to them. And this feeling turns an ordinary walk into an unforgettable adventure, flying over streets and houses with your loved one, along with your mate.

Composite design is not as simple as it may seem. When you carefully study the canvas, it becomes noticeable that two forces are more densely present: one of them is the earth on which the man is walking, the other is the sky in which the woman is hovering. This artist wanted to say that love is able to inspire, regardless of the distance and location. Enamored people are capable of being above all worldly worries and worries.

The artist showed the viewer that love inspires and raises lovers over the city, the whole world. The faces of the characters of the picture radiate happiness and joy, and they see around them only beautiful, only sublime, because they were able to overcome by love the laws of earthly gravitation and achieve heavenly weightlessness.