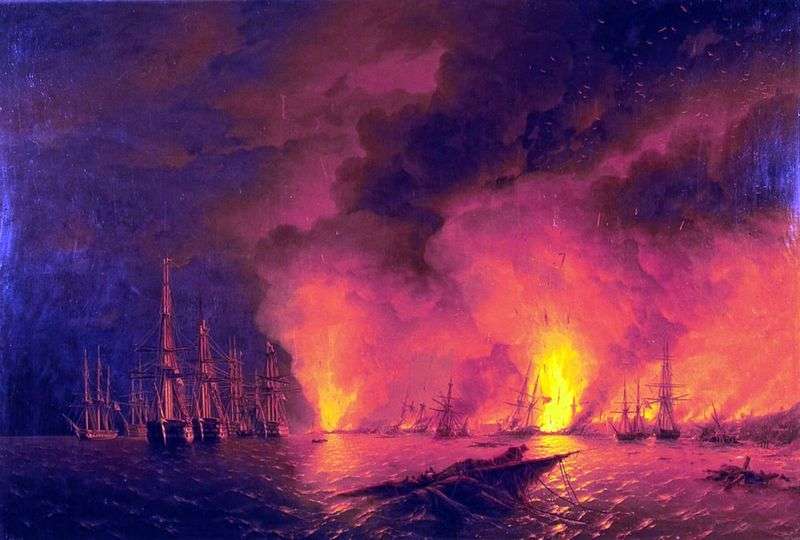 In the works of Ivan Aivazovsky, a significant place is occupied by paintings on the theme of sea battles and victories of the Russian fleet. The artist led a kind of chronicle of historical events, from the time of Peter I and ending with the battles in the Crimean War of 1853-1856 and the liberation of the Balkans in the Russian-Turkish war of 1877-1878. Aivazovsky was a contemporary of many battles, which later depicted on his canvases.

Since 1844 he was appointed artist of the Main Naval Staff. The painting “Sinop battle” reflects the events of the Crimean War of 1853-1856, when on November 18, 1853, a sea battle took place in Sinop Bay between the Turkish and Russian squadrons. The Russian squadron, led by Vice-Admiral P. S. Nakhimov, discovered Turkish ships, and blocked them in the bay. The result of the battle was the complete destruction of the Turkish fleet. Upon learning of the Battle of Sinop, Aivazovsky immediately began to learn from the participants in the battle details. Aivazovsky wrote two paintings dedicated to the Sinop battle day and night, which were presented at the exhibition in Sevastopol. These were the paintings “Sea Battle of Sinop on November 18, 1853” and “Sinope battle.”

The painting “Sinope battle” immediately attracts the eye with its unusual for the marine theme color. The picture is as if illuminated by flashes of red. The artist portrayed the moment when the Turkish squadron was completely destroyed and the wreckage of enemy ships burned, cast off from the salvoes of the Russian fleet, illuminating the whole environment with fire. Russian battle ships calmly and solemnly march along the flat sea surface. In the sky rise clouds of smoke, lit by the light of fire. The overall color of the picture consists of black and red colors, which seem to divide the space on the canvas.

Despite the victory of the Russian fleet, any battle is a tragic event, bringing death to people. And such a color solution of the composition of the picture sates it with this tragedy and drama. Admiral Nakhimov personally visited the exhibition and noted the great work of Aivazovsky, in particular the painting depicting the Sinope battle at night. He said that the picture was written with great accuracy and correctly reflects the events that took place.