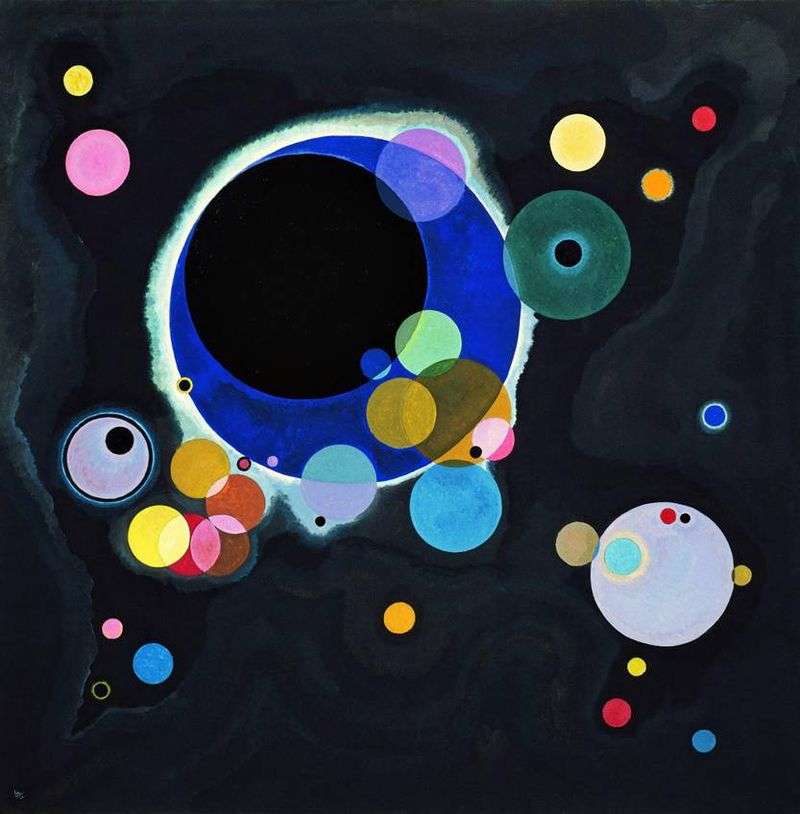 Painting “A few laps,” written in 1926. Materials for writing works were the oil and canvas. Dimensions 140×140 cm canvas up. At the moment the picture is in New York, the Guggenheim Museum.

Of course, this work belongs to the genre of abstract art, which was the brightest representative of Vasily Kandinsky. For the artist circle – is not only and not so much a geometrical figure as a universal guide to the other world.

This closed figure with one glance at it connects us with the world, its shape is not the beginning, just like the end. Thus, Kandinsky presents a combination of circles of different sizes and colors as a combination of infinity, something cosmic and absolute.

At first sight, the composition seems chaotic jumble of figures, but the longer peer into these circles, the clearer it becomes that each of them is in place. On a dark background here and there emerge showy, bright yellow, bright blue circles superimposed on top of the bright black, and so layer after layer. In some ways, these figures resemble planets and luminaries, moving in space.

Around one of the figures you can see the glow that further enhances the similarity circles with space objects. Bright colors, so your favorite artist, forced to wake up the imagination. The intersecting circles get new shades of colors and faces, the look I want to watch their bizarre lines and superimposed on each other.

Love of a circle passing through all the work of Kandinsky from 1920 to 1930. The artist saw in the circle everything I wanted and was looking for: space, power, force. The circle on his canvases – not even a circle, and being endowed with an inner voice and character. Simple geometry, thanks to Kandinsky, he finds soul.