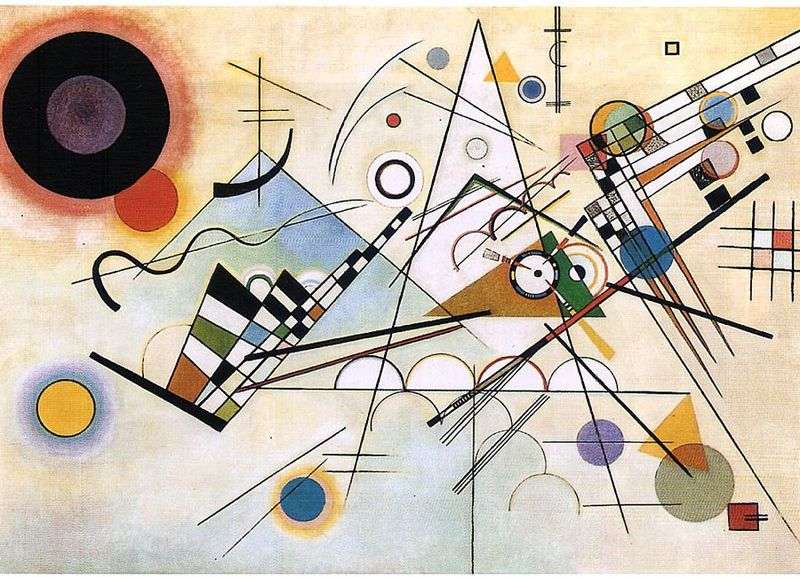 “Composition VIII” was created in the so-called “cold period”, the canvases of which were marked by rigor, scientific logic and contained a rational beginning. In this painting the artist went from color to form, she creates a composition and is the main character.

Kandinsky considered this picture one of the most important in his work – the exact expression of his theory about the emotional properties of color, line, shape. During the completion of work on it, he taught at the Bauhaus and worked on the book “Point and line on the plane.”

The spectator was completely shocked by the transition from the apocalyptic emotions of the Seventh Composition to the geometric rhythm of the Eighth. Written ten years later, in 1923, it represents a logical development of the creative genius of the artist and, of course, to some extent reflects the influence of Suprematism and Constructivism, imbibed Kandinsky in Russia and the Bauhaus.

The painting differs in an amazingly positive tone, its life-affirming colors and slender forms, forming figures, do not dissolve in space, the colors transmit both the rainbow, the trees, and the spring flowering. Abstract painting Kandinsky conveys not only the mood of the author, but also the state of nature that caused it.

“Composition VIII” was one of the first paintings acquired by the collector Solomon Guggenheim. In 1930, he visited the Bauhaus, where he immediately bought several works by the artist. This was the beginning of an extensive collection, which is now exhibited at the Guggenheim Museum in New York.