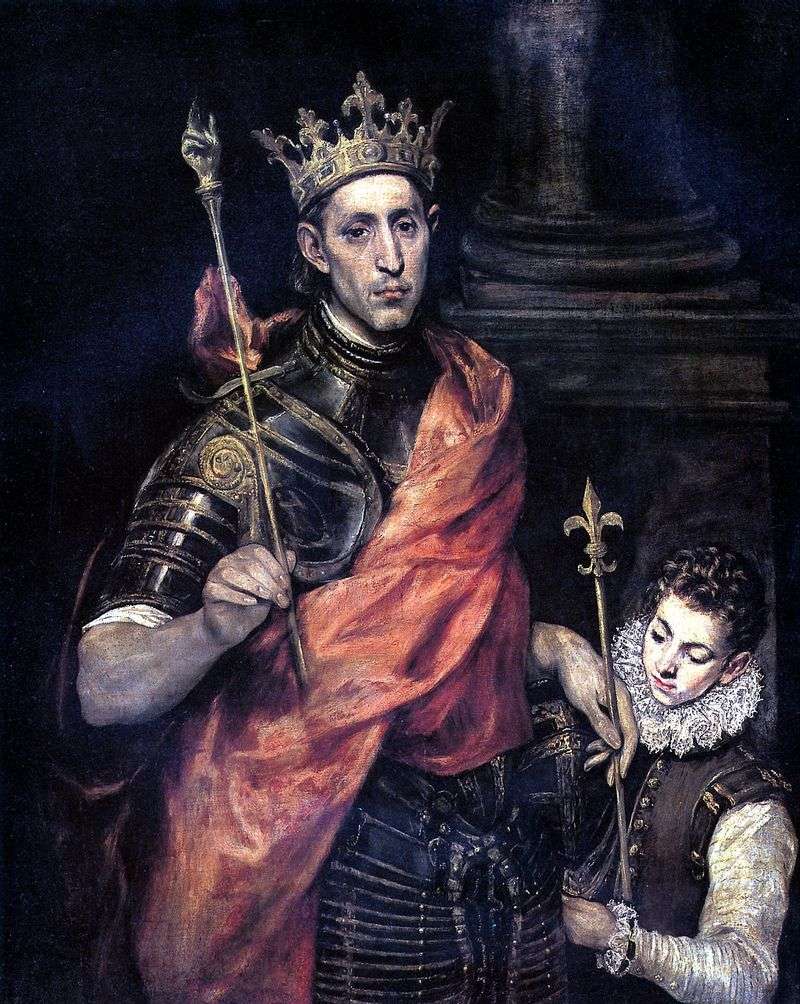 Painting of the Spanish painter El Greco “Saint Louis, King of France”. The size of the picture is 120 x 96 cm, canvas, oil. The full title of the painting is “Saint Louis, King of France, with a page”. Louis IX Saint – the King of France, the son of Louis VIII and Blanqui of Castile; was born in 1215 in Poissy. Handsome and elegant, Louis was interested in his youth in all manner of chivalrous fun. In 1234 he married Margarita, the daughter of Count Provansky. The king’s entry into office changed little of the government’s policy: the royal power was already so strong that

it was not difficult for Louis to maintain his authority against the vassals.

English King Henry III tried to regain the possessions of his ancestors, but Louis won a brilliant victory at Taliebourg. In 1244, the king fell seriously ill and vowed to take upon himself the cross. Having received a banner in Saint Denis, a sash and a pilgrim’s staff, and asking for the blessing of the Pope in Lyon, Louis arrived with the Crusaders in September 1248 in Cyprus, and in the spring of 1249 in Egypt, to Damietta, whom the French took on June 6. Moving on, Louis went to Mansur, but the strength of the Crusaders was weakened by strife and unrest.

During their retreat to Damietta, the Saracens caught up with Louis and took him prisoner, from which the king repaid the surrender of Diamet. In May 1250, Louis sailed from Egypt, but remained 4 more years in Syria, waiting for the new crusaders.

Through his moral influence, Louis supported Christians in Palestine, made intercourse with the Asiatic sovereigns, undertook work to strengthen Jaffa, Caesarea and Sidon. His fame spread far and wide. Having heard of the death of his mother, Louis returned to France after a six-year absence and zealously set about government affairs. Louis did not feud with the system of feudalism and respected the rights of vassals, although he was no longer the first among equals, but the sovereign. Ludovic made a lot for the reform of the court and the judicial process.

Disadvantages of the feudal system, which did not allow the supreme court in the kingdom, Louis eliminated, establishing as a general principle the right of the king to intervene in the affairs of his subjects. Ludovik banned judicial battles and private wars; dissatisfied with the decision of local courts have the right to appeal to the royal court.

Ludovik inspired unlimited confidence: even foreigners gave their arguments to his decision. There is a story about how after the Mass, Louis left the palace, sat under an oak tree and listened to the complaints of all. Under Louis, the judicial power of the king greatly expanded; the central judicial institution was the Parisian Parliament, which consisted of peers and lawyers. All branches of the administration were under the watchful eye of Louis.

A great influence was enjoyed by legists, whose activities greatly contributed to the expansion of royal power. Louis loved books and art. He was called Pericles of medieval architecture. He diligently erected temples: his time includes the cathedral in Reims, the charming church Sainte Chapelle in Paris, etc. The failure of the first crusade did not cool the enthusiasm of Louis. In March 1270, he went to Tunisia, hoping for the treatment of the local sultan. While waiting for the arrival of Charles of Anjou, Louis remained idle.

The army developed diseases; the son of Louis Tristan died; on August 3, Louis himself fell ill, and on August 25 the king died. Louis was buried in Saint-Denis. Immediately after the death of Louis, the question of his canonization was raised by his son, France and Europe, who unanimously glorified the holiness of the pious king. In 1297 the bull of Pope Boniface VIII proclaimed Louis IX to be a saint.