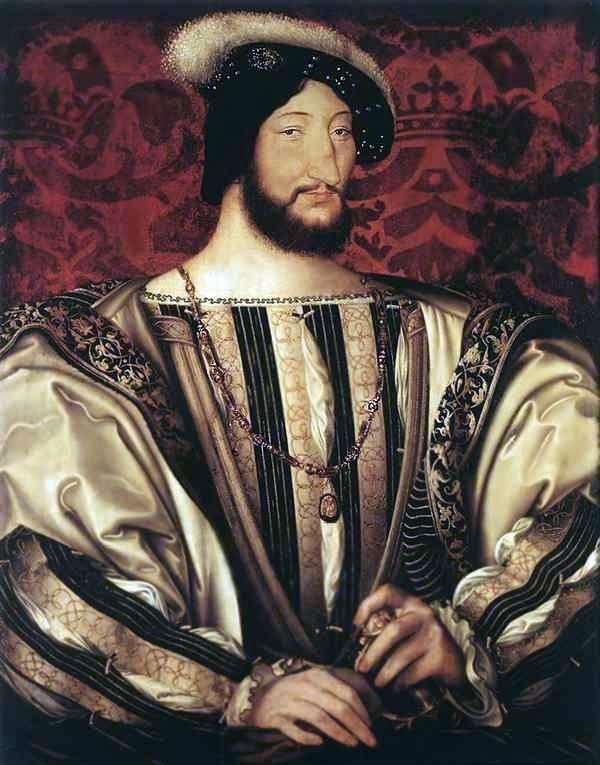 Jean Clouet, in this large portrait, shows Francis I in a rich Renaissance robe. Traditional insignia of royal majesty were dispensed with without a crown. A hat with white feathers adorned with pearls, satin clothing, generously embroidered with gold, a medal on the gold chain and crowns on the expensive red brocaded fabric behind the king’s figure – clearly indicate that we are facing the King. Rich clothes, a wall carpet do not overshadow the intelligent, resolute expression of the face of the king, recognized as one of the greatest and wise rulers of France. His narrowed blue eyes, his penetrating

gaze, his dark mustache and beard give his face an exceptional appeal.

Francis I, son of Charles of Orleans, succeeded on Louis XII’s throne in 1515. His reign was marked by a special interest in art and literature, as well as an endless war against the eternal enemy of Charles V, the Emperor of the Holy Roman Empire, for combating which he united his efforts with the German princes Protestants and Suleiman the Magnificent. His reign was marked by the flowering of culture. The French language was proclaimed official, replacing Latin.

The Royal College was opened, giving the opportunity to get education for all comers. A law was issued that obliged all printers to make a copy of all published works for the state archive. Under Francis I in France, the Renaissance began. He was a man of truly universal gifts and a patron of arms, and a military leader. His enormous energy was enough for court intrigues, for the development of the army, and for replenishing the collection. It was he who laid the foundation of the French national collection, which originally housed the new royal palace in Fontainebleau.

King had a wide outlook and exquisite taste. In 1517, Francis I placed Leonardo da Vinci near Amboise, and all the paintings that the artist had at the time of his death in 1519 were inherited by the king. Among them is the famous portrait of Monna Lisa.