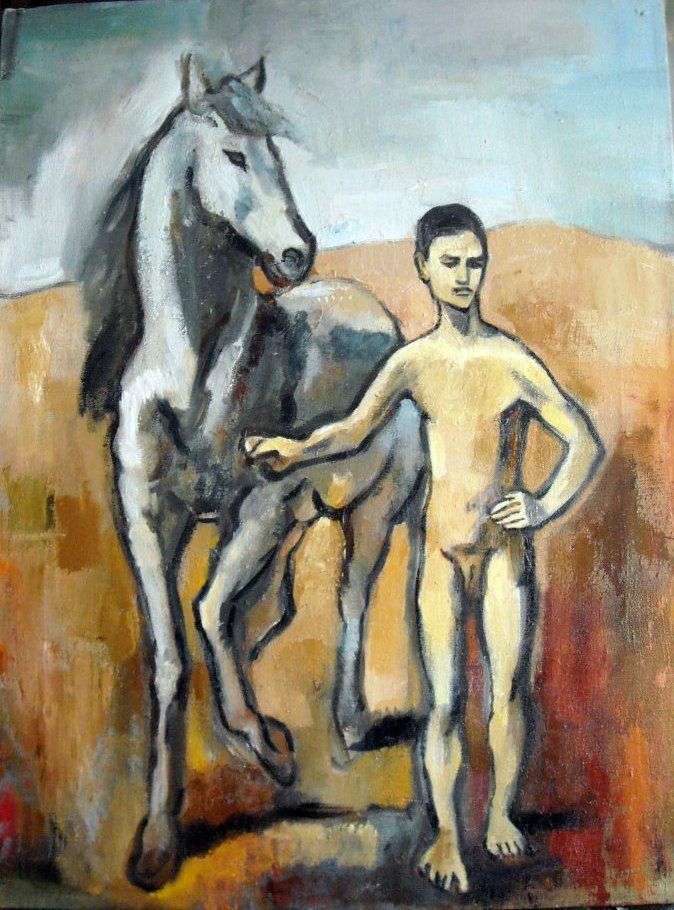 The “pink period” takes not so much time in the work of Picasso – only two years, but in such a short time the painter managed to create a number of canvases that were distinguished by their own style and laid the foundation to his fame. One of such iconic works is “The Boy Leading a Horse”.

Grace, subtlety, cheerfulness in a compartment with light tones of pink, beige, gray and elastic smooth line distinguishes both the pink period of Picasso as a whole, and this picture in particular. Picasso worked a lot at that time in the portrait genre, repeatedly reproducing his first

The second passion was the genre scenes, where the main characters were circus performers, comedians, wanderers, etc. In the picture we see a naked young man who leads a graceful horse – human and animal figures are written out with special thoroughness and honesty, as well as purposely emphasized clear, almost continuous line. Everything in this work breathes freedom and boundless space – both a naked boy, free from clothes, as if from conventions, and a graceful horse, without a habitual harness, and the land without any green veil, bushes and trees.

A free man with a free animal walks on a free land. Picasso himself longed for this freedom, seeking to isolate himself from the tight shackles of academic art.

Seven years ago, a remarkable scandal was associated with this picture – a descendant of the former owner, Julius Sheps, wanted to regain the “Boy and Horse”, taking him from the Museum of Modern Art in New York. The grand-nephew of the already deceased banker claimed that the painting had been transferred to the museum illegally. The banker wanted to sell the painting, ostensibly no longer being its owner, since he forgot that he had already presented the painting to his second wife Elsa. However, through trials in an old family business, the museum defended the remarkable Picasso painting, leaving it in its original place in its beautiful collection.