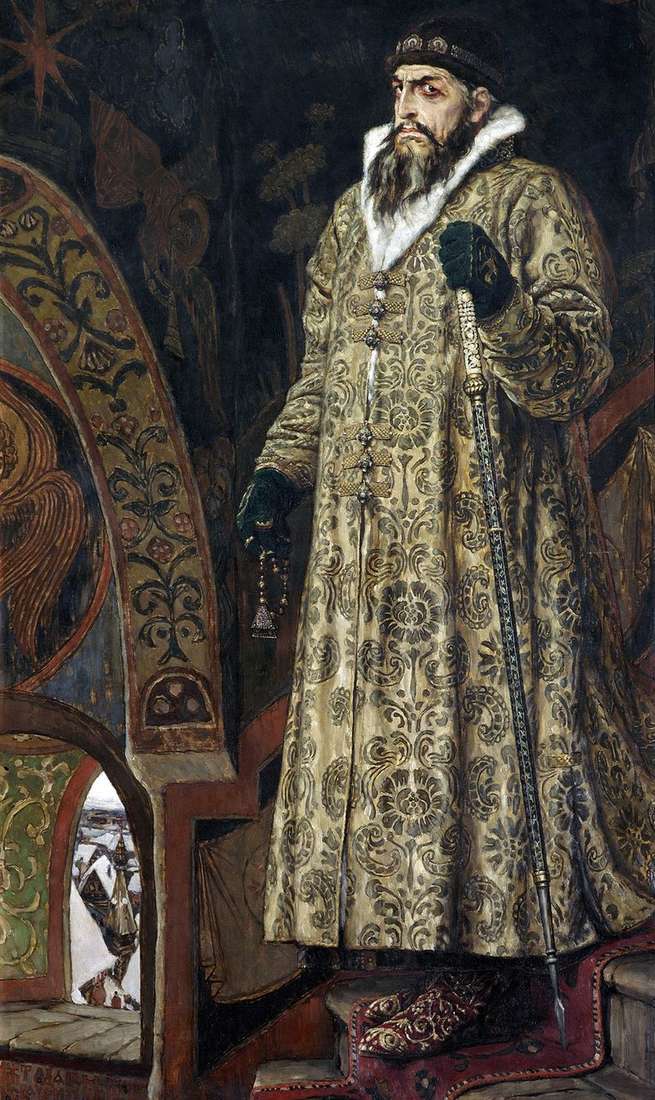 The portrait of the great autocrat of All Russia was shown by Vasnetsov at the jubilee XXV exhibition of the works of the Peredvizhnik Association. The artist believed that this particular painting would adequately represent his work, despite insistent requests for the display of the famous “Bogatyrs.” He considered the last picture unfinished, while the work “Tsar Ivan Vasilyevich Grozny” was perfect for Vasnetsov, both artistically and spiritually.

The idea of writing a portrait of Tsar Ivan IV came to the artist when he moved to Moscow in 1878. Walking around the city and viewing

the monuments of deep antiquity, admiring the Kremlin walls and reverent before the majestic Cathedral of St. Basil the Blessed – the best achievement of the architecture of the times of Ivan the Terrible, the artist everywhere saw the image of the king, heard his imperious voice, the heavy pace of his steps and staff strikes. In the eyes of the convinced monarchist Vasnetsov, Ivan IV was perhaps the most vivid and odious figure of all rulers who ever ruled the Russian land. Presenting the terrible king in various composition variants of the description, the artist dwelled on the idea of creating a portrait.

For the complete embodiment of the artist’s idea of the king’s chest image was not enough. The greatness of the autocrat could be reliably shown only by depicting him in full growth. The figure of the king occupies a vertical canvas almost entirely, which to the limit increases the already deep sense of the historical and cultural significance of Ivan the Terrible in the fate of the state entrusted to him.

The king is pictured on the stairs in one of his chambers. On it – a truly royal attire, carefully painted by the artist in strict accordance with historical reality: a golden brocade outfit with a dark oriental ornament, inlaid red velvet boots and a matching headdress. In one hand, the ruler grasps the staff tightly. And this is not at all a support. The Sovereign’s hand holds a real weapon.

It was the staff that pierced the leg of the servant of the sworn enemy, Prince Kurbsky, more than once he was walking along the backs of disagreeable boyars, he was also destined to interrupt the life of the heir to the throne. Another hand touches rosary beads – a symbol of deep faith and respect for Orthodox traditions. Under the feet of Ivan the Terrible is a red carpet. Another moment, and the king will step on the two-headed eagle depicted on it – the emblem of the state. So in real life: to subjugate the state, to break its device and establish its order, modernizing it and making it as manageable as possible. Let it be a terrible blood-red price.

But still, the main thing in the picture is not the pose of the tsar, nor the details of clothing or interior. The main thing is the face of the autocrat. The artist managed to convey on the canvas the versatility of the historical personality. Ivan IV – not only “Terrible”, but also an incredibly wise ruler, a man of strong will, remarkable strength of mind, resolute and severe. By the will of fate, the features of the era and the immediate entourage of the tsar, he was made self-contained, secretive, suspicious, and, as a consequence, lonely. From one his name shook and trembling panic arose among most of the boyars and other people surrounding the king. But was it possible to become different, having been plagued by a network of conspiracies, betrayals, intrigues and murders of loved ones? All this is reflected in the glance of a great personality, who looks at the viewer from Vasnetsov’s picture.

The artist paid much attention to writing the background of the picture. Unlike the monarch’s attire, the environment surrounding the ruler is the fruit of the creative imagination of the master. The canvas shows only a small part of the inner staircase of the chambers and a view from the window, revealing a view of parts of the modern king of architectural buildings. In this case, Vasnetsov incredibly reliably managed to show the fullness of the peculiarity of the ancient Russian architecture.

Looking at the picture, the viewer can feel the narrowness of the staircase and its steep turns, see a small window with a semicircular completion – the distinctive features of old ancient buildings, consider the tent belfry and wooden peaked roofs of the houses forming Moscow streets. Humbly quieted medieval, covered with snow, Moscow. Its ruler is firm and stern.