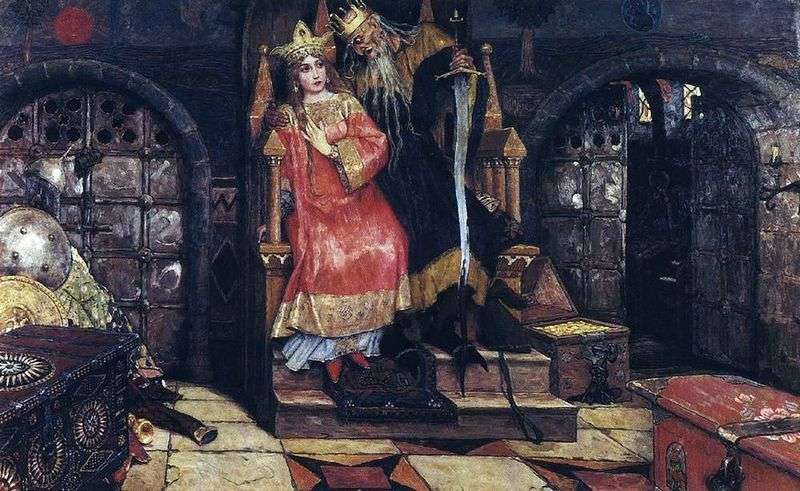 Above the famous canvas “Kashchei the Immortal” “storyteller” in painting, Victor Vasnetsov, worked since 1917, and finished his artist in 1926. This picture became chronologically the last of his creation.

Each of us knows fairy tales about Koshchei the Immortal, who personifies hatred and evil in Russian folklore.

Vasnetsov often drew inspiration from Russian fairy tales, transferring the images of fairy-tale characters to his canvases. Each character has always acquired his character, his soul, from the canvas to us, to the audience, looks as if he were really a living person,

and not a hero of a myth or a fairy tale.

The canvas is dominated by three colors: gold, red and dark brown. The main emphasis is on richly furnished chambers with luxurious furnishings. Greedy and frantic look of Koshchei gives us to understand that before our eyes a stingy and stingy old man who is withering over his wealth. This we can understand by the three large, multi-empty chests and the grief of gold in the left corner of the room.

In the center of the picture, around this wealth, Koschey, depicted by the artist in the form of a bony but formidable old man, and a young maiden – one can assume that Vasnetsov portrayed Vasilisa the Beautiful. It can be seen that in the bony and ugly body there was nothing spiritual and warm. Only greed and desire to own everything. The crown on his head and the sword in his hand tell us about his omnipotence, but they are not able to subordinate, and even more so, to arrange for a young girl. His gaze stiffened on the blood-stained sword, and her eyes showed unconcealed horror and fear of Koshchei.

Many noted that during the writing of the canvas, while he was writing for no less than 9 years, absorbed all the events taking place at that time in Russia. Also, events are tied with symbolism in the picture. Are there any features of Vasnetsov’s symbolism in this work that is difficult to say, but one thing is clear that his work accurately conveyed his feelings and feelings of the author during the creation of this masterpiece.