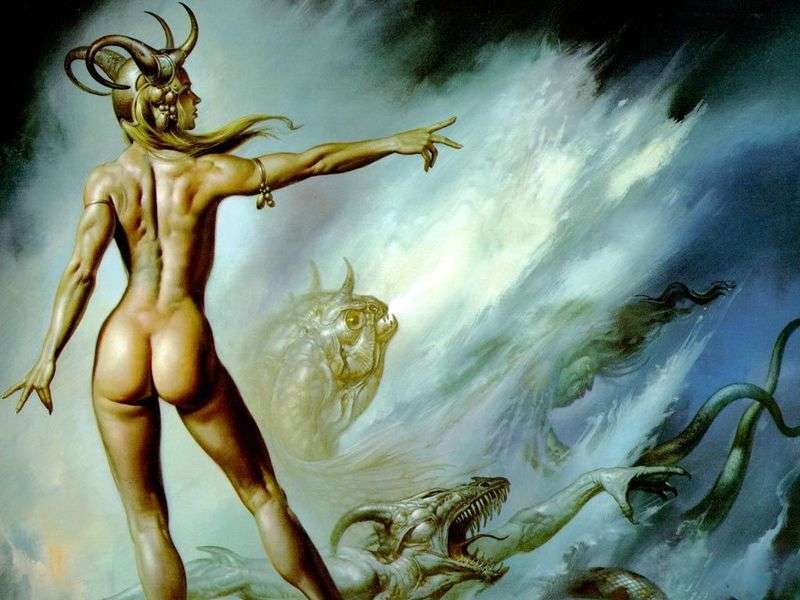 In honor of the Amazons, extraordinary women warriors, they named a stone – an Amazonite or an Amazonian stone. This is a kind of feldspar, traces of copper oxide painted in a beautiful bluish-green color. The most beautiful and large crystals were found in the Ilmensky Mountains near Miass, in South America in the Amazon River area, as well as in Colorado and Pennsylvania.

Rarely, the entire mineral is uniformly colored green, more often spotted white and dull spots and points. Clean samples are used for ornaments, ornaments and are ground mainly in Yekaterinburg. There are many legends and folk legends about the campaigns and conquests of recalcitrant Amazons about their courage, beauty and witchcraft.

In the painting by Boris Valledjo “Queen of Demons,” the Amazon appears before us as the leader of the otherworldly forces. At the behest of the omnipotent mistress, fantastic monsters, summoned from the depth of centuries by the mysterious magical power of fearless Amazons, rush into battle. Raging whirlwinds rush through the sky, black thunderclouds shut the sky – the demon queen goes to a merciless, bloody war.