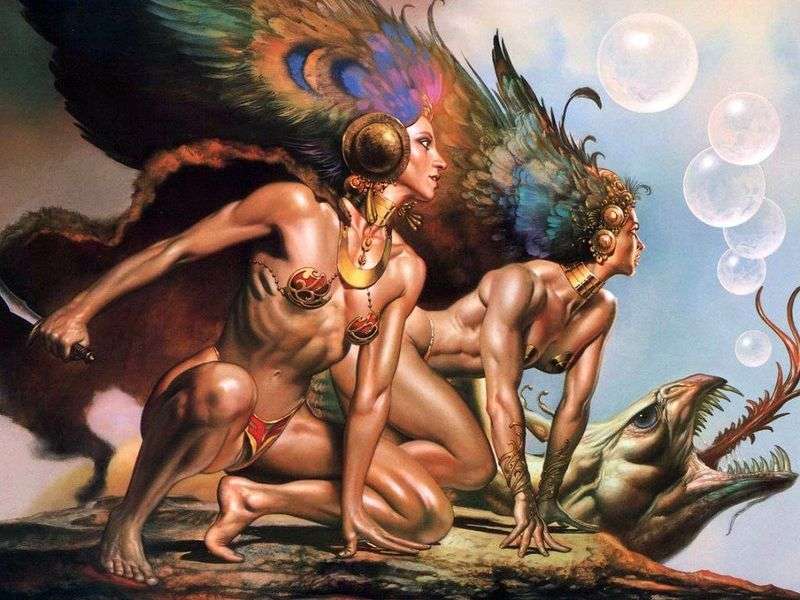 Most of all for the work of Boris Vallejo is characteristic of the realism of his works. Looking at his finished canvases, which are the living embodiment of the most daring fantasies, you are tempted to join this mysterious beautiful world.

In the genre of the fantastic heroic fantasy Vallejo attract figures such as Conan, Tarzan, mythological gods, heroes and mythical creatures, but with special sympathy the artist refers to the Amazons. These fantastic warlike women disturbed the minds of poets and artists from time immemorial. The father of mythmaking Homer mentions the wars of Bellerophon and the Phrygians with the Amazons.

The myth about the Amazons entered not only in epic poetry, but became the subject of educational Greek art. The most remarkable Greek artists of antiquity, for example, sculptors Phidias, Polyclett, painter Micon and others, depicted the Amazons in statues, reliefs and paintings.

Even in the Middle Ages, the tale of the Amazons does not completely disappear. During the revival of classicism, the Amazons are resurrected not only in poetry, but also in the conviction that this people really existed and, moreover, in Africa and America; from them the river Amazon got its name.

The primitive craving for battle in the painting of Boris Valedjo “Amazon” is expressed in every movement of these graceful predators, in their burning eyes, the tension of every muscle of beautiful strong bodies, ready to break from their seats and engage in battle with the enemy. Amazons again go to battle with the hated men to take possession of their wealth, horses, lands and… give birth to their children!