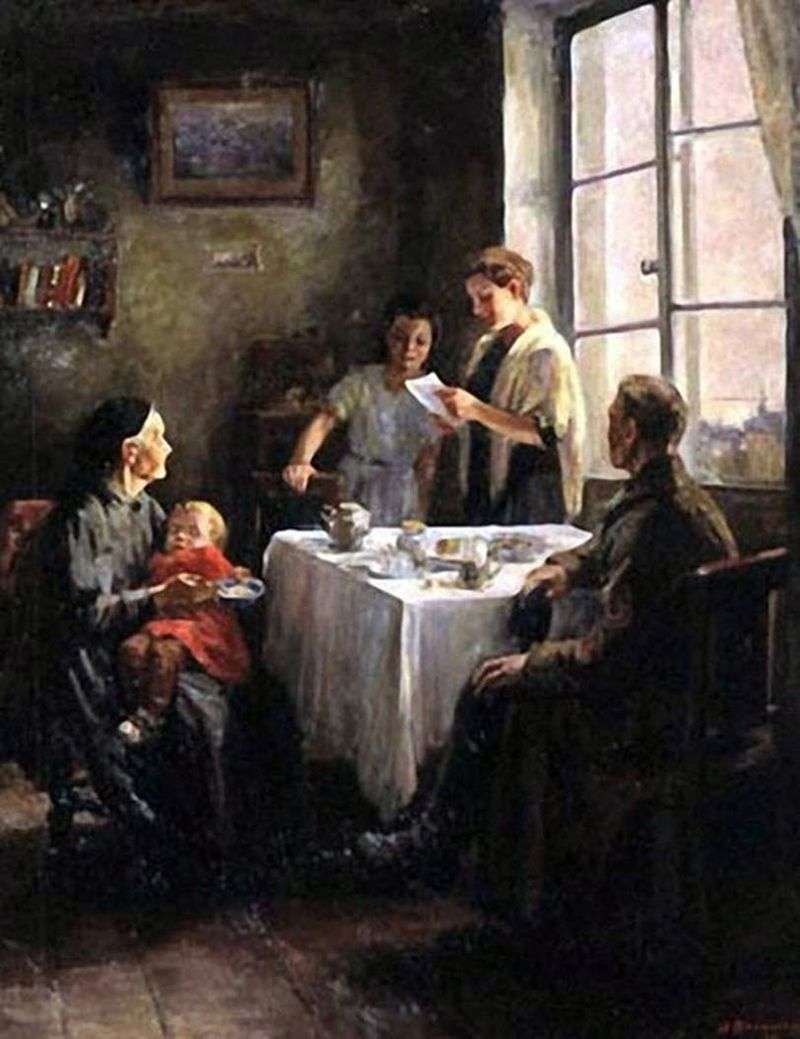 Perhaps it is difficult to find in our country a family that would not have been affected by the Great Patriotic War. Practically each of us had grandfathers or great-grandfathers fought on the battlefields, and grandmothers worked in the rear. From the lessons of history, I know how cruelly the fascist Germany attacked the Soviet Union.

During the war it was very important for the enemy to destroy the Soviet people. For this he did everything possible. One of such methods is the information blockade. That’s why getting good news from the front was a great joy, a great event in the life of every family. Postmen were trapped in danger and difficulty literally at every step in their hard, but such necessary work. These people knew that fate depends on the letters that they must spread to each house.

In the picture “Lead from the front” we see how a large family of different generations gathered at a large table near the window. A young woman is reading a letter aloud. Apparently lead good, because all very carefully listen to her, holding her breath. They have a kind smile on their faces. A woman stands near a large window, the daylight falls on the letter, making him almost the main character of the picture. Sunlight fills the room, giving the picture a feeling of long-awaited joy.

A woman is depicted in a simple black dress, and on her shoulders a white warm kerchief. Next to her is another heroine of the picture. She looks closely at the letter, afraid to miss anything important. At the table we see three more representatives of this family of different ages. One of them is a middle-aged man in uniform.

Another heroine is an elderly grandmother with a girl in a red dress sleeping peacefully in her arms. It is still too small to understand the horror of the war. The table is covered with a white tablecloth, and on it lies a modest treat for tea, to which people were so happy on such difficult war days. The family is happy that their grandfather and father are alive, everything is fine with him. Perhaps, even he will soon return home.