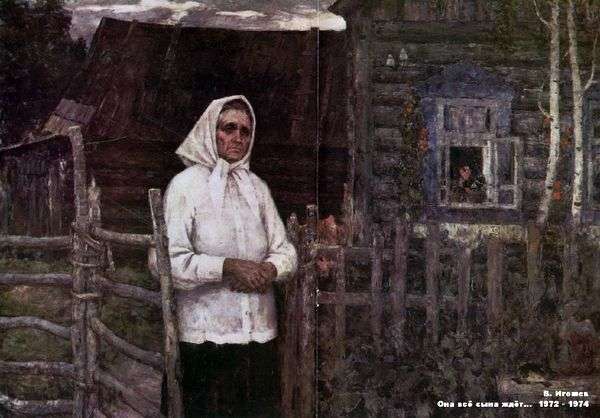 On the theme of the Great Patriotic War, written a huge number of books, music, shot a lot of films. This topic is truly inexhaustible, because it has turned the lives of several tens of millions of people, divided it into “before” and “after.”

Unfortunately, not all mothers, wives and daughters have waited for their sons, husbands, fathers from the front, from battlefields. I believe that in pictures or with the help of other artistic means it is possible to transfer only a small part of that pain, suffering that people had to endure in those years.

One such fate formed the basis of the picture of V. Igoshev “She is waiting for her son”. It shows an elderly woman standing at the open gate of her old house. Her eyes are full of sadness, sadness, anticipation, suffering. I think she spent a lot of time in this position. Every day a woman goes to this place in the hope that her beloved son will return, alive and unharmed. She always looks into the distance, but, unfortunately, the miracle does not happen. Perhaps she herself understands that there is no point in tormenting and waiting, but she can not help herself. The whole point of her post-war life is reduced to this.

Behind the back of my grandmother is a house with a clean, open window. On the windowsill are flowers, and the platbands are painted blue. A woman as she can tries to keep him in good condition, but every year doing it all becomes more difficult. Next to the window, the author painted a thin white birch, as if recalling that it is necessary to live on, no matter what.

Despite the tragedy of the picture, the woman is shown in a white blouse and scarf, a black skirt. From under the scarf, we see the gray hair of the heroine. Her face is wrinkled, and her eyes are narrowed. We can only guess what thoughts visit her gray-haired head at this moment. Maybe she remembers how his son went to the front, how he grew up… In any case, her thoughts are only about one – about her own, the only child she will never see again.