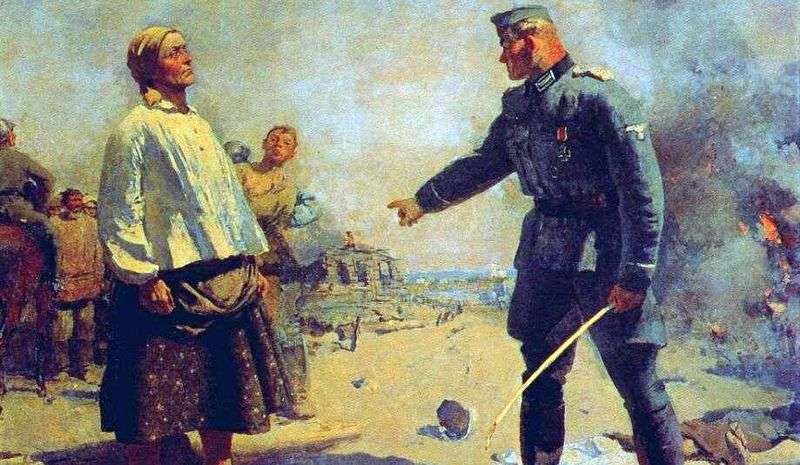 The unprecedented heroism of Soviet people, manifested at every step – on the battlefield, behind the enemy lines, in partisan detachments, has become one of the leading themes in Soviet painting of these years. The central figure of Gerasimov’s painting “The Partisan’s Mother” is a Soviet woman. It can not be intimidated by fascist monsters. Behind her is a native land, scorched and defiled by enemies, but not broken, not subdued.

The great strength of popular anger was experienced by fascist thugs. The German officer looks wretched, compared with a simple Russian peasant woman,

depicted against a smoky fire. Her face keeps a stern seal of great suffering, but this is the suffering of a proud and strong person. In contrast to the vivid, in a symbolic way, the image of the Hitlerite is devoid of the expressed individual characteristics. His large figure swayed on crooked legs, and the gesturing gesture is exactly suspended in the air.

The artist emphasized the low forehead and heavy jaw of the fascist, which made the animal, the animal in his appearance, perform even brighter. Close-up Gerasimov gives the figures of the mother and the fascist, and only outlines the other characters in the most general terms.

In an episode of a dramatic clash between a patriotic woman and an invader, the artist showed courage and resilience in the struggle inherent in Soviet people, born of a firm belief in the inevitability of the victory of light and reason over barbarism, darkness and obscurantism. “The mother of the partisan” is an epic monumental work, full of great artistic force. In 1958, the painting was exhibited at the International Exhibition in Brussels and was awarded a gold medal.