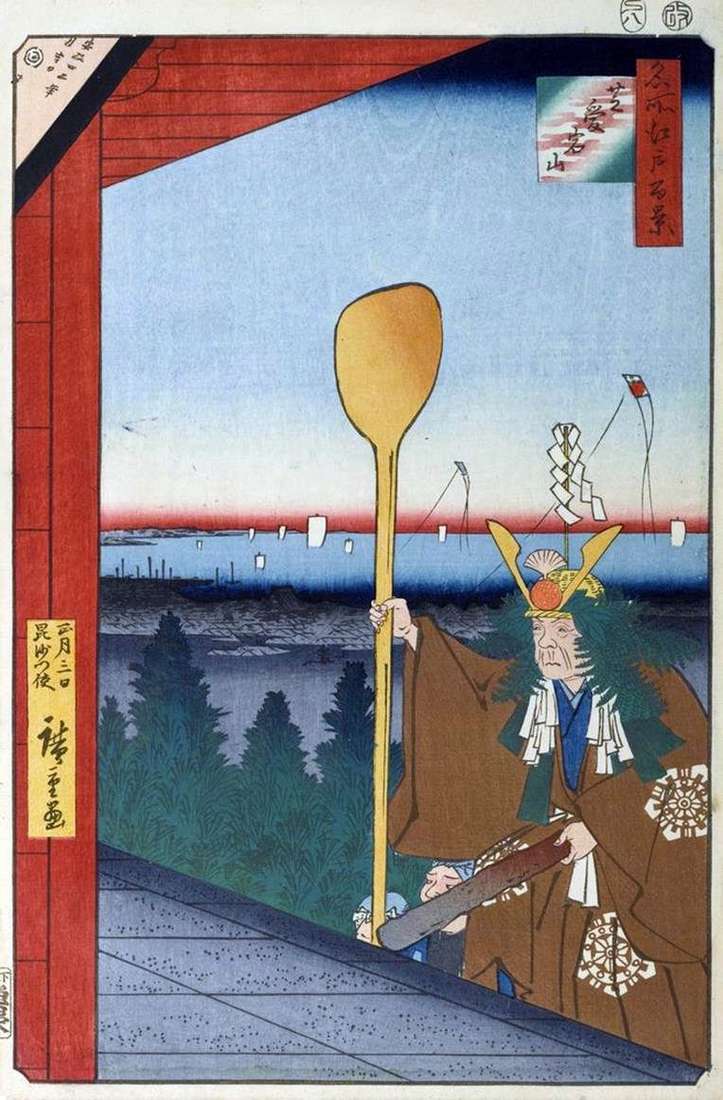 Mount Atagoyama was in the east of the city of Edo in the Yamanote district, where the daimyo mansions and high-ranking samurai Edo were located. Hiroshige portrayed the view from Atagoyama of the urban development, with the towering Tsukiji Honganji Temple and Sibaur Bay. On the mountain was located the famous Shinto sanctuary of Atago-jinja. The most significant and favorite holiday in Atago-jinja was Bisyamon-Matsuri, dedicated to Bisamontan – the guard of the northern direction in the Buddhist model of the world and one of the seven gods of happiness. Usually he is portrayed in the guise of a warrior clothed in a samurai armor, as shown in the engraving.

“Message Bisamontan” was elected by any of the townspeople. After the ceremonial eating of rice, he returned to the sanctuary, climbing the steps – this moment and captured Hiroshige. The first plan occupies the corner of the sanctuary and Bisamontan’s figure. On his head is a helmet decorated with algae and fern. Behind him is a sixteenth simenava, with a ritual straw rope and woven strips of paper. In the hands of a large spoonful of сяamoji. On the belt is a huge shamoji pestle. In the earlier version of this engraving there is no dark blue band running along the edge of the platform in the foreground. The main color changes affected the long-range plan of the late version. There was a blue band, harmonizing in color with a strip in the foreground.