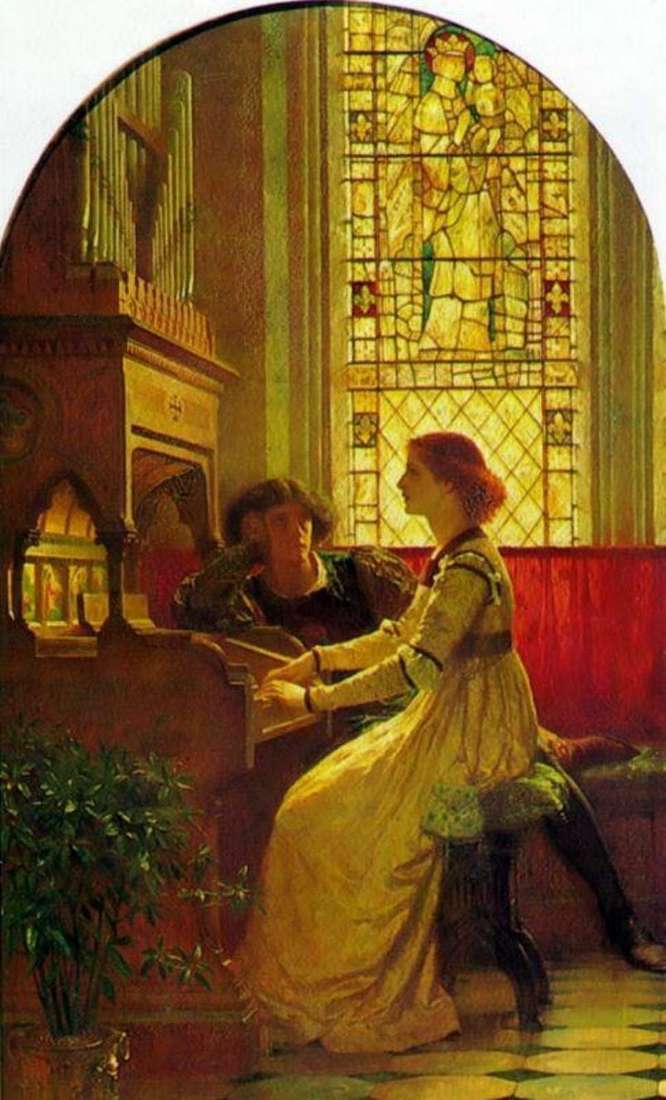 For the past centuries, mankind has not ceased to search for the elixir of immortality, the philosopher’s stone, to try to invent a time machine, but what else is there! As well as the search for harmony – both inside and outside – has always been the cherished dream of many representatives of the human race.

Perhaps one of the most harmonious epochs was the period of classics in the history of Greek antiquity, when in people all the principles were balanced: terrestrial and heavenly, spiritual and physical, low and high. The sounds of music are also capable of evoking a feeling close to catharsis – a moral shock and purification of the soul. Those who heard the sounds of the organ “alive” will confirm these words. Organ music seems unearthly, inhuman.

Is that why the artist Frank Dixie called the picture, on which two are imprinted – a man and a woman performing something on the organ, namely “Harmony”? The girl is extremely spiritual – she does not even look at the keys under her fingers, as if the sounds from them are extracted not by them, but by God himself. Her gaze is directed somewhere through walls and space, she is not here herself, but is carried away with sounds into the world of dream and harmony.

The young man closely observes the girl herself and, too, as if she is in some kind of prostration, is depicted in the Rodene thinker’s pose – propping her hand against her cheek and leaning on the edge of the organ. The space of the temple, where, most likely, the artist and “spied” this scene, is filled with light thanks to the huge stained-glass windows. The stained-glass windows themselves are decorated in the form of a mosaic, on which the figures of Our Lady with the baby in their hands are guessed. Thus, the inner space of the Gothic temple literally moves apart before our eyes. In the lower left corner is a vase with an evergreen plant. It serves as a reminder in a miniature: time does not go anywhere, we leave, and nature and art will last forever.