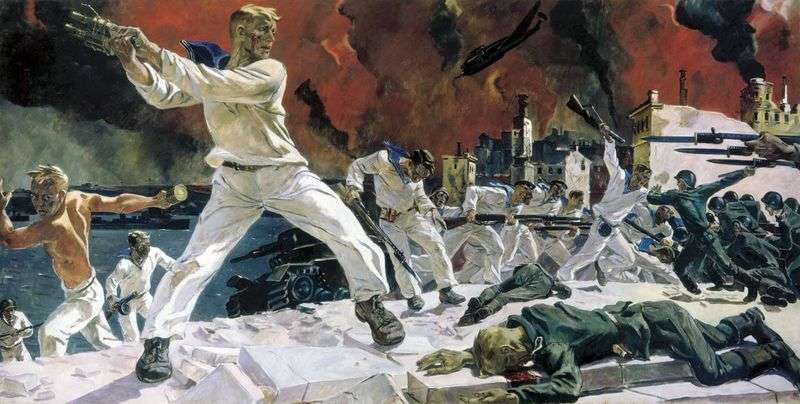 Deineka Alexander Alexandrovich is one of the remarkable Russian artists who was not on the sidelines during the Great Patriotic War. He did what he knows best – he did it. One of his favorite cities was Sevastopol. After seeing the photo from the newspaper, in which only the ruins of the city were visible, the author realized what heavy fighting took place here.

In his creation “The Defense of Sevastopol” the author depicted only the last hours of heavy defense. Then the sailors went into battle in their snow-white uniforms. They went to certain death, because the enemy had already broken through to the water itself, and there was nowhere to retreat. And in numbers Germans won. The picture even shows how one of the enemy tanks bypasses our guys from the back.

Visually, the picture is divided into two parts. The distant plan shows us the city enveloped in flames. Only a few wrecks can be seen, otherwise everything is covered with large balls of smoke and flame lights. The sky is completely invisible, only the black-and-red background. This author showed what happens when the enemy wins. Remains only ruins. And the complete opposite is the first plan of the picture. Although it was here that the author showed the fight and how the guys go on their own doom, but this part of the picture is still light. Only the forms of enemies are dark. And wherever there are sailors, even the plates are still clean and white. This emphasizes courage, patriotism, thirst for the victory of our people. The will for each person is something light, pleasant and joyful. And people are ready to fight for it.

Since the time of the creation of the picture coincided with the military actions, the author could not find the right person for the image of the central sailor with a grenade. The model was a female athlete, who had a suitable physique. The whole picture brings sadness, sadness, a sense of tragedy. Sailors even in the last moments of life tried to destroy as many enemies as possible, so that their death would not be in vain.

The work on the painting took several months in the author. He managed to finish it for the exhibition “Great Patriotic War” in 1942. To attribute it to the illustration of the episode of military action is not entirely correct, since the author used some transformations, but that this is one of the most dramatic paintings in Russian art no one doubts.