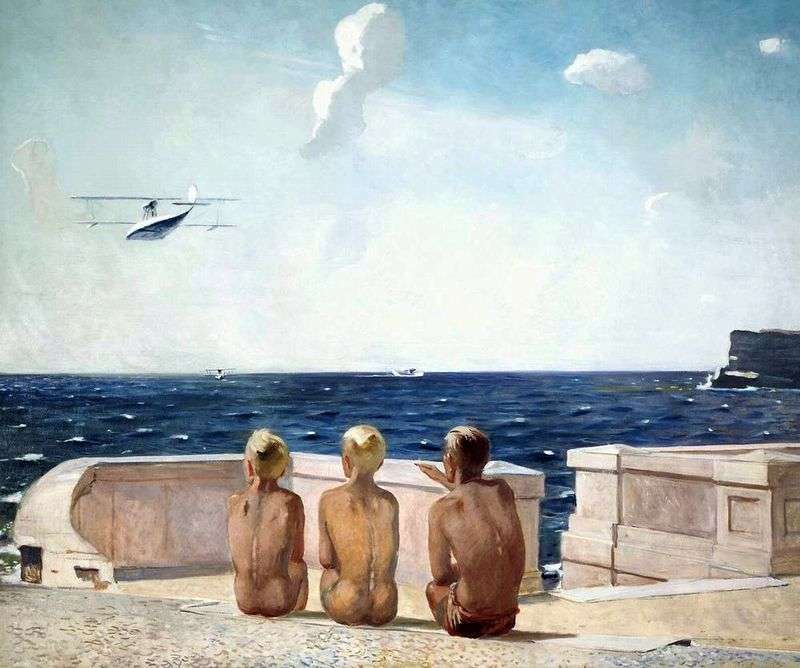 Alexander Alexandrovich Deineka is a famous Russian artist. All the time he was interested in aviation and everything that relates to it. He devoted a number of his works to this topic. While in the Crimea, where Alexander Deineka often traveled, he came up with the idea of the well-known painting “Future Pilots”. The painting was painted in the pre-war time.

In the picture we see three figures turned back to us. Two young boys, completely naked, and an older man. In the distance of the picture, high in the sky is an airplane. It smoothly crosses the vast expanses. The man points at him with his hand and smears something at the guys. They, in turn, listen with a sinking heart and do not take their eyes off the plane. Apparently, this man and the pilot himself of the same unit shares his experience with the younger generation. And boys dream that, when they grow up, they will necessarily become pilots, like him.

The author portrayed a man much darker than the guys. So he probably wants to show us his importance and responsibility to his cause. Perhaps it was the father and his sons who went out to the morning pilots’ teachings. Children always want to follow in the footsteps of their parents, and even if it is so attractive.

Over the blue-blue sea, in the distance, another plane can barely be seen. It feels like he has sat on the water and swims like a ship. The guys are sitting on a beautiful stone pier. A beautiful descent is made to the sea, and the road is paved with paving stones. The sky is bright blue, where floating clouds are floating.

What exactly served for this title of the picture. Perhaps, just at the moment when the author was walking along the pier, he accidentally witnessed a conversation about the future of these young guys. Perhaps this is what prompted him to reproduce such a picture. He showed how much these guys like it and it’s important through their naked image.