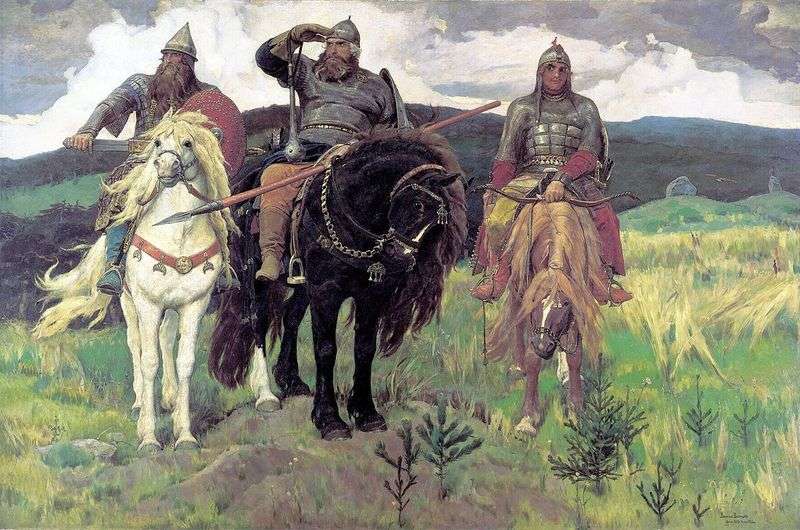 About 30 years of life and creativity Viktor Vasnetsov devoted to creating a picture, which later became his most recognizable work. Defenders and guards of the Russian people – “Bogatyri” – everyone knows them exactly as they appeared on the canvas of the great master of epic stories.

In the open field, on the border of the Russian land, the bogatyrs are closely watching whether the enemy is crooked and does not offend where the weak. They are the three main characters of the epic tales – Ilya Muromets, Alyosha Popovich and Dobrynya Nikitich.

in the center. Mighty and strong, he examines his native spaces, looking for a foe who is always ready to fight back. The hero is so strong that, it seems, does not feel the weight of the forty-pawn club hanging on his hand. The remarkable strength is surprisingly combined in it with the breadth of the soul and the kindness of the heart open to people. Ilya Muromets is a real historical person, and the tales of his unprecedented exploits are a real chronicle of life. Later, the hero became a monk of the Kiev-Pechersk Lavra and now his name can be found among all the saints. Vasnetsov wrote Ilya Muromets with a simple peasant Ivan Petrov, a man of strength and tall, kind and sincere – like the hero himself was.

On the right hand of Ilya Muromets is represented the educated and courageous Dobrynia Nikitich. He is always ready to protect his native land from a foe – his sword is already half taken out of its scabbard. Only he wears a gold cross. Vasnetsov recalls that his Dobrynya is connected with the legendary voivode of Vladimir, the prince of Kiev and the baptizer of Russia. Bogatyr became for the artist the embodiment of the collective image of the Vasnetsov family: himself, his father and uncle. It is no accident that the researchers of the master’s work noted the similarity of the appearance of Dobryny and the artist.

The youngest is Alyosha Popovich. A brave and agile, slender young man can defeat the enemy by force, cunning and even deceit. The prototype was the son of Savva Mamontov, who died at an early age. This cheerful and sociable person presented his mischievous temper to the young hero – the artist transferred these traits of his character to the picture.

Each of the bogatyrs is ready to repel the enemy’s attack at any time – Ilya Muromets holds the spear firmly, Dobrynya Nikitich is the sword, and Alesha Popovich has already put the arrow into the bow. The helmets on their heads are like the domes of Orthodox churches and are a symbol of the right work, blessed feats for the good of the people.

Horses are like horsemen. Ilya’s huge funnel is only able to hold the metal chain. Powerful and strong, it complements the grandeur of the image of his master, who will be betrayed to the end. Do Dobryny – proud, dignified horse, anxious neighing warning the rider of a possible danger. A fiery horse Alyosha is ready to rush into battle, boils with young fervor and energy.

It was not without reason that the epic heroes joined forces. A storm is coming. Clouds, from afar driven by a gusty wind, waving motley grass, the fluttering manes of horses do not promise anything good. But the defenders are here, they are ready to meet the enemy.