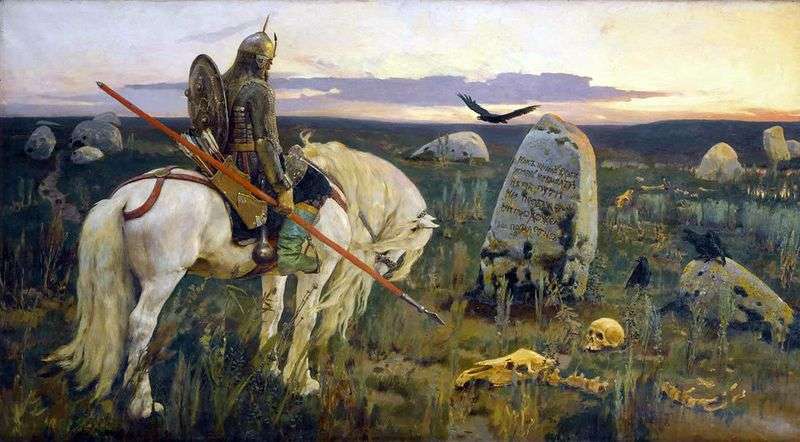 This picture of VM Vasnetsov is written, like many of his other paintings, under the influence of fairytale and epic stories. In the center of the work is Ilya Muromets. He is known as the most courageous and strong hero in Russia. His face is not visible, he sits on his white horse, armed with a spear, shield, mace, bow full of arrows.

The whole image speaks of his meditation, the figure of the hero is majestic and mighty. Thoughtfulness is visible in the bowed head. His spear is also tilted down. The author shows the unity between him and his gallant friend – a horse, because the horse’s position

is also facing down. Despite the fact that the horse stands confidently, his head is tilted.

The gloomy background only accentuates the mood of VM Vasnetsov’s work. The area is marshy, there are almost no vegetation, the rocks are also scattered in the darkest tones. You can see the bones left after the battle, and above them fly crows in search of their easy prey. Before the hero is a difficult choice, a burden of responsibility. It is very difficult for him to make this decision.

The picture is supplemented by impending storm clouds, which further aggravate the situation and point to the complete hopelessness of the situation: neither to the left nor to the right there is no road, but if you go straight ahead, then death awaits. I want to believe that the bravery’s courage will prevail over gloomy thoughts and forces, he will wake up from his heavy thoughts, go straight and destroy the evil power and all the enemies that are blocking his path. Thus, he will once again save Russia.