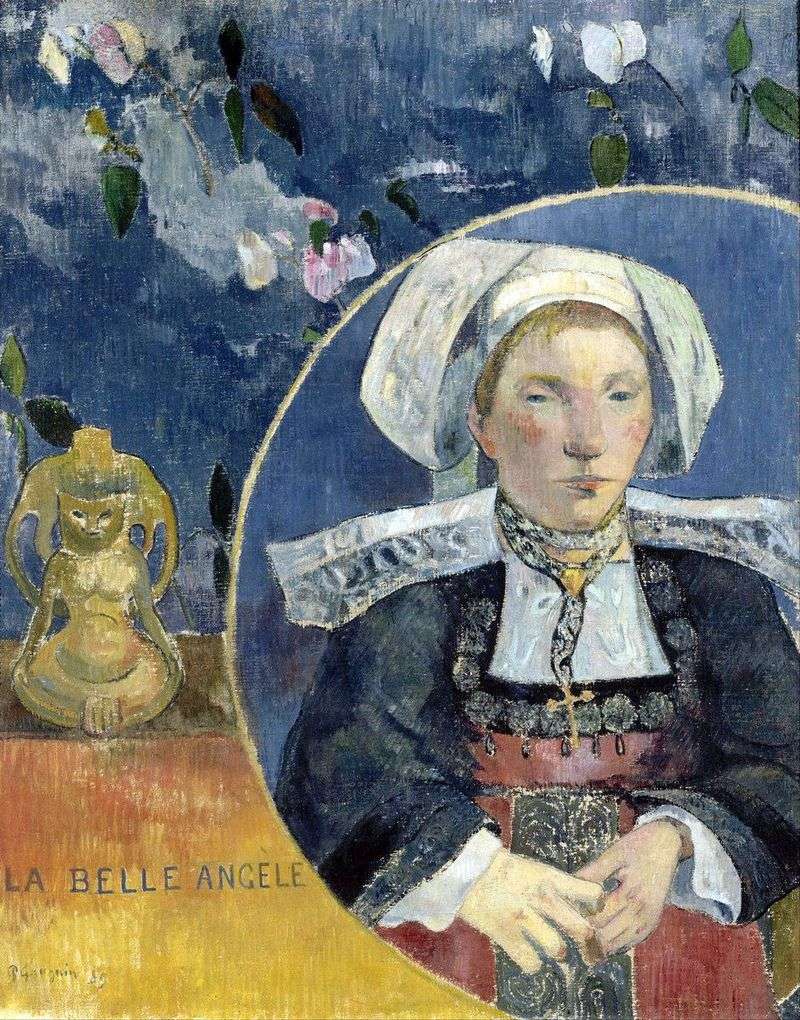 An amazing work, always creating a contradiction between the title and content. But such is the view of a brilliant artist who sought to convey to the viewer his aesthetic ideas through his paintings.

Portrait of “Beautiful Angela” was written by Gauguin in 1889 and felt the obvious influence of the traditions of Japanese painting, namely engraving. Although at first glance, it is not easy to find parallels between engraving and a portrait of Breton.

As in the engraving, the heroine is located in the foreground, while it is as close as possible to the viewer. A peasant girl, depicted to

the waist, and the background are separated from each other by a frame – such a composite solution does not correspond to the traditions of academic painting. Rather, this is an obvious borrowing from traditional Japanese prints – a demonstration of double space.

Non-standard is the image of the heroine herself – a ruddy face with a big nose, poke-in eyes, hooked hands. The heroine has a real prototype – this is the wife of the businessman, the future mayor, Madame Sartre. Reminiscences of eyewitnesses have survived, which assert that when Gauguin presented a portrait as a gift, Madame Sartre’s mother exclaimed: “What a horror!”, And the person whom she portrayed resolutely rejected the gift. But despite this reaction, Gauguin was very pleased with the canvas.

The painter did not aim to achieve a portrait resemblance, on the contrary, he specially “dressed” the heroine in a traditional Breton costume with embroidery, distorted facial features, turning the heroine into an idol, a popular prototype of a peasant woman. The fact that Gauguin saw a unique, even wild, primitive beauty in a simple peasant face is confirmed by the name of the picture.

Art critics now see in the “Beautiful Angel” features primitivism. An outlandish figure in the Peruvian style, and large capital letters on the canvas can be regarded as subtle hints of emerging primitivism.