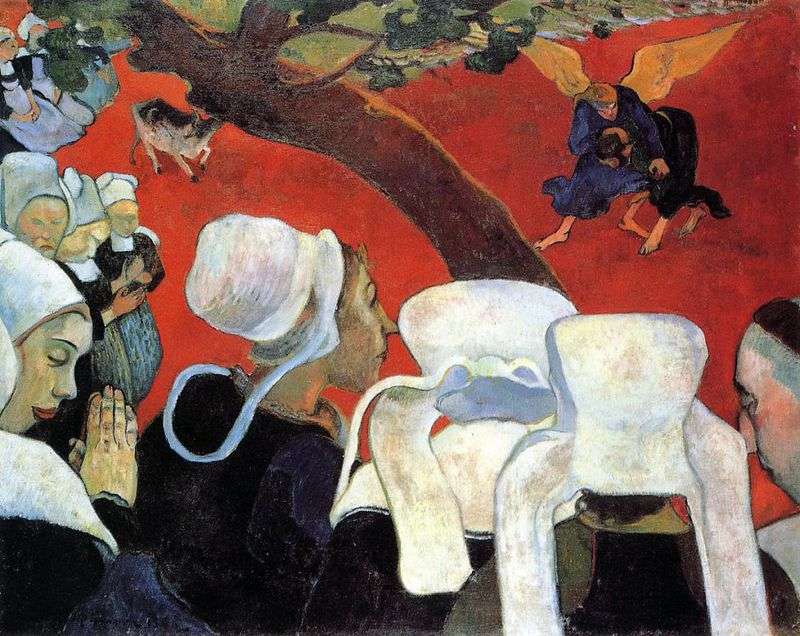 “Vision after the ceremony” – oil on canvas. Painting of the French artist Paul Gauguin, written in 1988. At the moment it is exhibited in the National Gallery of Scotland, in Edinburgh. The canvas depicts a biblical story in which Jacob fights an angel. The fight takes place in the background, the viewer’s view is primarily through the images of women returning from the church ceremony. The picture was created on Pont-Avenue in France.

Initially, Gauguin began writing the landscape in the summer, under the open sky, and later was inspired by devout religious women. After that, the

artist decided that it is worth writing canvases devoted to religious topics. The use of colors, shapes and lines in the “Vision after the Ceremony” really represented a new unique approach to painting. Inspired by his Japanese engravings from the masters of Hokusai and Hiroshige, Gauguin developed the idea of unnatural landscapes. Instead of presenting the spectator with natural colors, the artist paints a picture in intense red, black and white colors.

Gauguin experiments even with the figures on the canvas, distorting the forms, exaggerating the characters and using lines of bright colors, instead of applying soft gradient transitions typical of the artists of that time. The colors look flat and static. It is unlikely that in this case we can talk about the depth of color. Gauguin aspired to go as far as possible from the generally accepted ideas and natural colors, trying to show how he sees the world. Indeed, the color, technique and style of some of Gauguin’s paintings were due to his inspiration by Japanese engravings.

Right in the center of the image is a tree, it seems that he has no beginning and no end. The tree trunk visually divides the composition in half, dividing the women and fighting with the angel of Jacob. This solution in the composition also made it possible to identify the main objects of the canvas. The bend of the trunk of the tree in the center coincides with the shape of the head of the most prominent nun, due to which, of course, first of all the eye falls precisely on it. And the foliage of the tree is clearly directed to the side where Jacob fights, due to which the artist has achieved an accent on this area. The perspective of the picture is deliberately skewed.

Moreover, it was Emil Bernard who noted the fact that Japanese engravings had a huge impact on this work of Gauguin. Obviously, when

A comparison of Gauguin’s “Visions after the Ceremony” with Japanese engravings may seem overly obvious after Vincent Van Gogh copies Hiroshige’s engravings on his canvases, with diagonally located trees and a riot of red. However, referring to the illustrated albums of Hokusai “Manga”, Bernard was very original. He compared Sumo wrestlers from Japanese engravings with the battle of Jacob and Angel in Gauguin’s painting. These same characteristics can be traced in the features of the faces of nuns. The plot shows us a story from the Bible in which Jacob fights the Angel.

Gauguin tried to use Breton’s technique, which visually “tilted” the space towards the viewer. Women are dressed in different white hats, and it seems that they are the only ones who see what is happening in the picture. Several colors in the picture prevail over the rest – these are red, black and white shades. Thus, the artist shows us the gloomy nature of this picture. The red color on this canvas attracts the eye of the spectator most of all, it symbolizes the aggression, the fight that takes place in this picture.