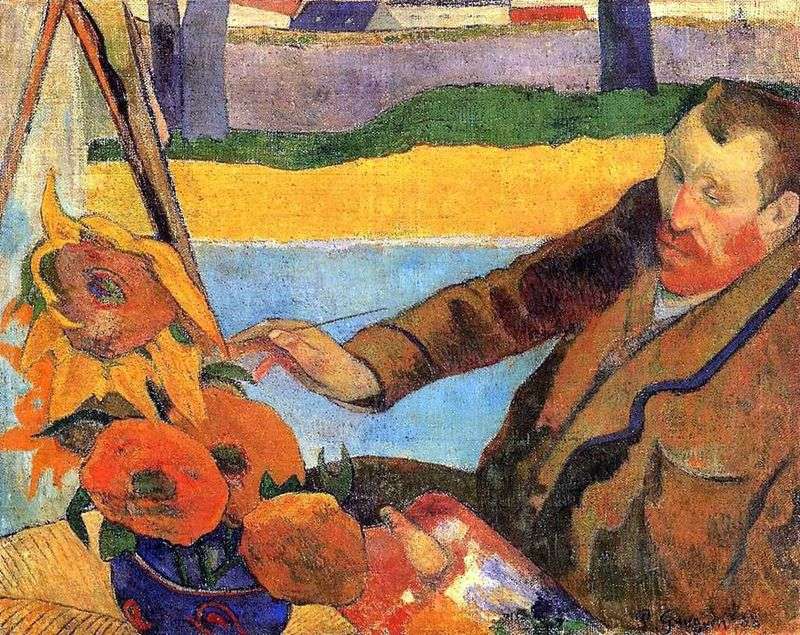 One of the most strange and sad pages in the biography of Paul Gauguin is devoted to friendship with another famous painter – Vincent Van Gogh. They met in 1886 and today it is difficult to say what served as the ground for the emergence of friendly relations – emotional, eccentric, irreconcilable in their attitude to painting, hardly suited friends for each other.

In 1888, two of the greatest painters arrived in Arles in the hope of establishing here a new colony of artists, free from the usual academic traditions. Here Gauguin creates a number of his canvases, among them a portrait of a newly

The amateur of a non-standard association of genres and exact quotes Gaugin and here could not resist experiments.

The first thing that catches the eye of the viewer – Van Gogh is depicted at work, and, having looked at the easel, the famous “Sunflowers” of the painter can easily be recognized.

If you compare the original painting of Van Gogh and its implementation on the portrait of Gauguin’s brush, you can consider the obvious differences. The painter did not aspire to detail, rather in his work he wanted to convey the process of Van Gogh’s creation, such as he represented it. It is unlikely that Gauguin could be a real witness to the writing of a still life – the picture was written even before Gauguin moved to Arles, and was intended to decorate his room. The contemporaries of the master say that Gauguin himself appreciated the entire series of sunflowers of his friend, who was destined to become the former in the shortest possible time.

The portrait itself is distinguished by the rhythm of the line and the expressiveness of the color. The whole composition is built on a harmonious combination of large color spots. Using pure colors, Gauguin accurately reproduces the features of the portrayed Van Gogh.

Being already a well-known artist, Gauguin allowed to treat Van Gogh somewhat haughtily, which wounded an impressionable friend. Misunderstanding and disagreement led to a conflict when Van Gogh attacked a senior comrade with a knife, which he later deeply regretted. Gauguin left Arles, placing a fat point on the artistic alliance with Vincent.

Today the portrait is in the Van Gogh Museum in Amsterdam.