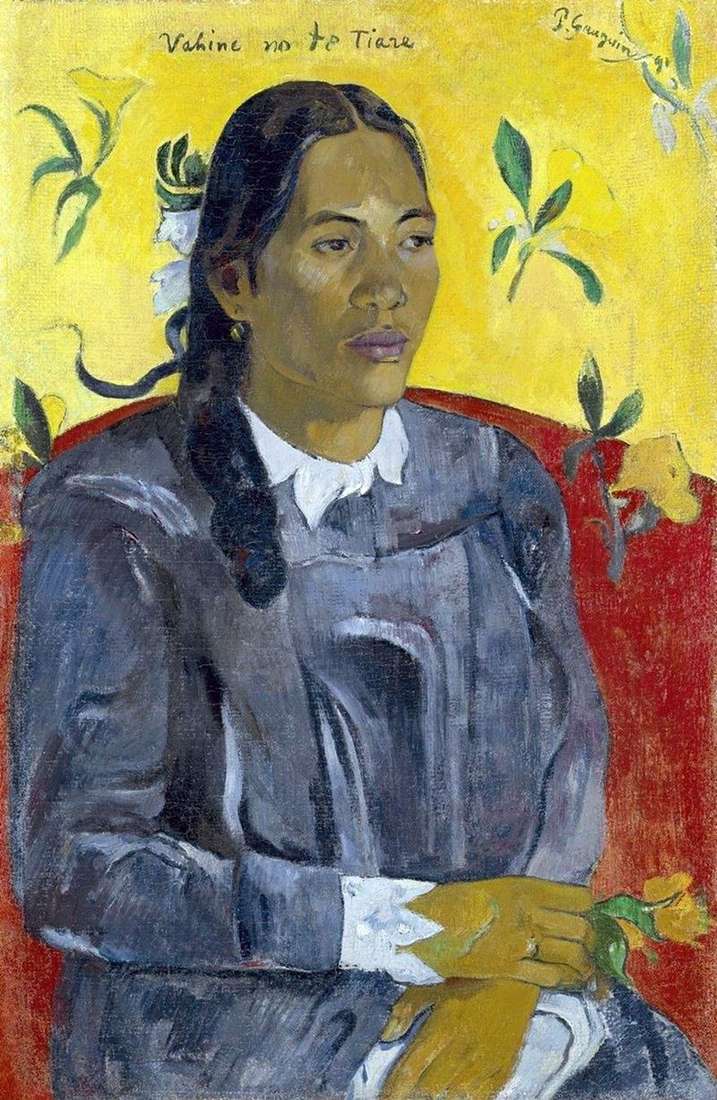 The portrait of a Tahitian woman in a European dress and with a flower in her hair is one of the first works of Gauguin’s first Tahitian period.

In 1891, the painter moves to the island and settles there, having bought himself a hut. A new life, absolutely different manners and lifestyle, a different aesthetic delighted and inspired Gauguin.

The depicted heroine of the painting is a neighbor of the artist who was looking curiously at the hut of an alien European, without daring to disturb him. However, curiosity still prevailed, and one day she was on the threshold. The woman asked permission

to see the reproductions of paintings that were hung on the walls of Gauguin’s hut. Japanese prints, paintings of primitivists, Monet bewitched a Tahitian unfamiliar with painting.

While the guest was examining the paintings, Gauguin sketched out her portrait, which made the islander very embarrassed. She immediately rushed off, but soon returned dressed elegantly and with a flower in her hair.

Not so long ago, French missionaries actively began to work on the conversion of “wild” Tahitans to Christianity and achieved considerable success. That’s why a woman poses for an artist in a European dress. In her hair, her traditional flower is Tahitian gardenia or tiara. This flower is still important for the local population – it is a symbol of this region, in addition, it was glorified by perfumers, using tiara to make exquisite spirits.

Such an unusual combination – an unusual appearance, far from the traditional understanding of beauty, a simple but civilized outfit and a flower that is a symbol of the island, surprises the modern spectator, not to mention the public, who admired the work immediately after its creation. Gauguin himself was pleased with the picture and sent her one of the first to the continent, where she almost immediately fell into the private collection of Jacobsen.

As for the technical side of the picture, you can immediately see that the picture is an obvious imprint of the author’s individual style, which manifests itself not only in the choice of the plot, but also in its embodiment – bright contrasting colors, pronounced contour, decorative and colorful. In composing the composition, Gauguin also uses a favorite technique – the bright yellow-red background is stylized with flowers, which gives the picture a completeness and balance space.

Today, with this wonderful masterpiece, you can meet in Copenhagen, in the New Carlsberg Glyptotek.