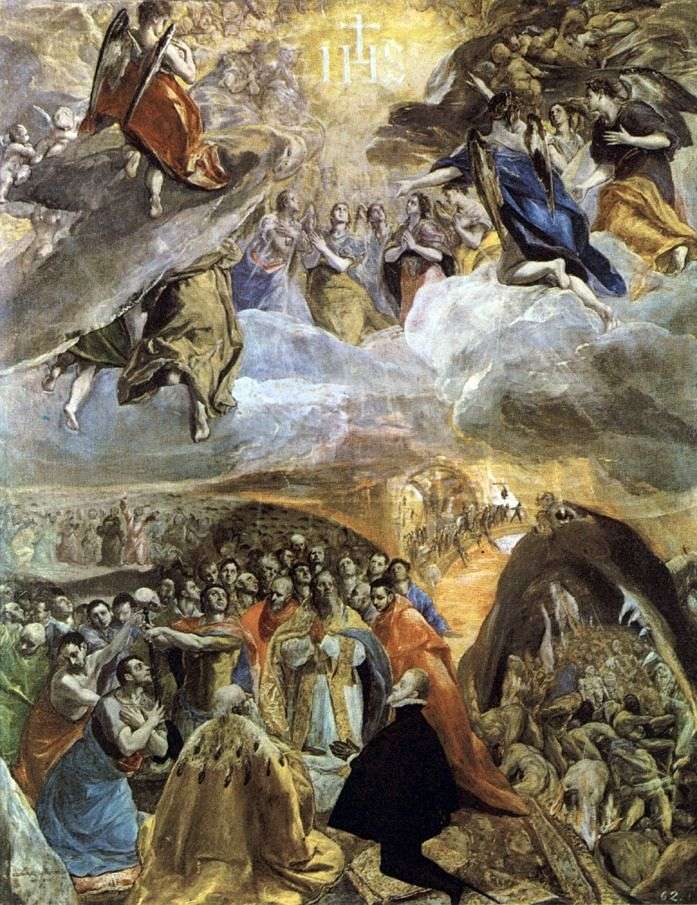 After the success of “Espolio”, having found a family, friends and patrons in Toledo, El Greco could continue to work peacefully in this city. However, the dream of receiving an order in the Escorial promised him a different, more complex and brilliant future. The artist probably realized that the field of activity in the ancient Spanish capital was too narrow for his capabilities. His hope was strengthened when he wrote “Worship of the Name of Christ.”

A grandiose mystical act is depicted, all of whose participants – among them Emperor Charles V and King Philip II – worship the name of Christ arising in the sky in the radiance of clouds and surrounded by soaring angels. The anagram of Jesus, recorded here, served as a symbol of the Jesuit order. However, El Greco thought least of all about the glorification of this order, whose influence he sensed enough in Italy and felt even more strongly in Spain. First of all he tried to please the king. Never afterwards did he paint such an official picture.

In search of creative solutions the eyes of the master again rushed to Italy. Perhaps, in memory of El Greco came the impression of the art of Tintoretto, the creator of huge mass scenes, imbued with the unity of the experience of many people. Working on the “Adoration of the Name of Christ,” where in the irrational space the images of paradise, earth and hell are combined, El Greco also recalled Michelangelo. The echo of the “Last Judgment” is felt in the image of the naked muscular bodies of sinners – an endless human flow that is absorbed by the huge mouth of the monster that symbolizes hell. Like an alarming reminder of the coming day of retribution, a ghostly distant plan of the picture appeared.

However, those great problems that El Greco was worried about in this canvas, have not been found here worthy artistic embodiment. There was a sharp contradiction between the image of the grandiose image of the otherworldly fantasy world and the small, almost chamber scale of the picture. The essence of this contradiction was not so much the size of the canvas, but the fact that the master could not saturate him with a sense of monumentality. The picture seems fractional, petty, loaded with a lot of details, dryly written out, there is a strange, unjustified entertainment here.

El Greco’s desire to follow tradition in one way or another is felt throughout the pictorial structure of the picture. A number of successful techniques in the depiction of two spatial streams, rich shades of red and some details – can not fill the sensations of its general artistic weakness. Now, when the tastes of the era have retreated into the distant past, when the whims and opinions of King Philip II have a secondary interest for the history of painting, the creative failure that befell El Greco is obvious.