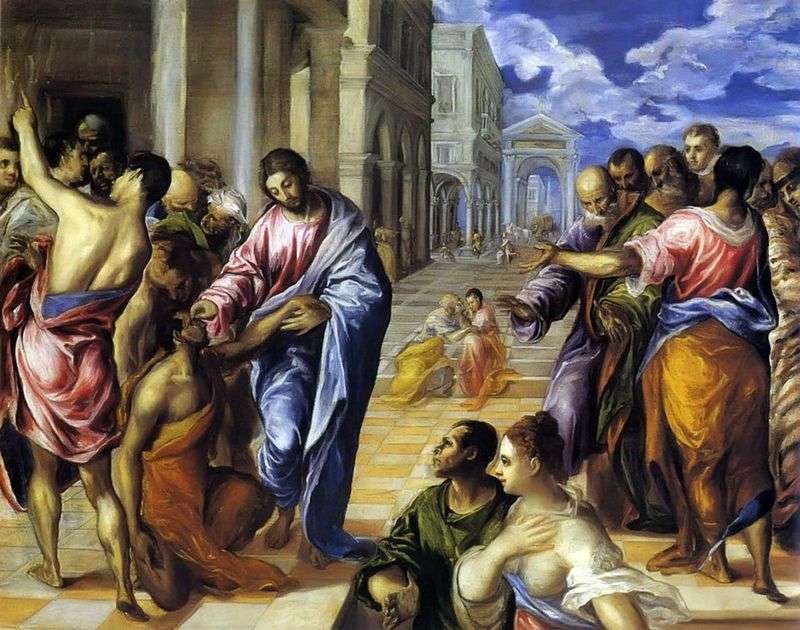 There are three works by El Greco devoted to this topic. Basically, they repeat each other, discrepancies are observed in some details.

The Dresden version, the earliest one, was not signed by the author. She is more free in terms of composition, more simple in design, in the foreground the artist has placed genre motifs – a dog, a sack, a jug – which in later versions has been ruled out. In the picture, the characters are drawn closer to the foreground, the more complicated perspective of architectural elements, the influence of manneristic techniques is traced, especially in the figure of the young man on the left side of the picture, turned with his back and pointing to the sky. This work was created under the influence of the Venice Painting School, in the 17th century authorship was attributed to Paolo Veronese, later to Jacopa Bazano.

In the Parma gallery, the least known version of the “Healing of the Blind”, written in oil on canvas, is kept. Probably, it was painted by the artist by the end of his stay in Venice. This is the smallest picture from all three “Healings”, the canvas around the edges was cut, the cutting line passed on the right to the right figure. In comparison with the Dresden version, in the Parma composition the figures are more freely arranged.

The third, the largest of the surviving paintings “Christ heals the blind,” is stored in New York at the Metropolitan Museum. In this unfinished work the influence of the Venetian school is clearly traced. In the background, the artist so subtly depicted two figures sitting on the sidewalk that through the layer of paint the tiles of the sidewalk shine through. It is assumed that the extreme left figure, facing the viewer – is a self-portrait of a young El Greco. In the XVII century. this work was in the collection of the Farnese family.

The exact date of its creation is still unknown; For a long time it was believed that it was written by a master at the beginning of his short stay in Rome. However, it is now assumed that he wrote it in Venice, then transferred to Rome. Some researchers hold the opinion that it was created in the interval between Dresden and Parma paintings. This work was previously attributed to Tinoretto, later to Veronese. In Madrid, a copy of the 17th century is kept.