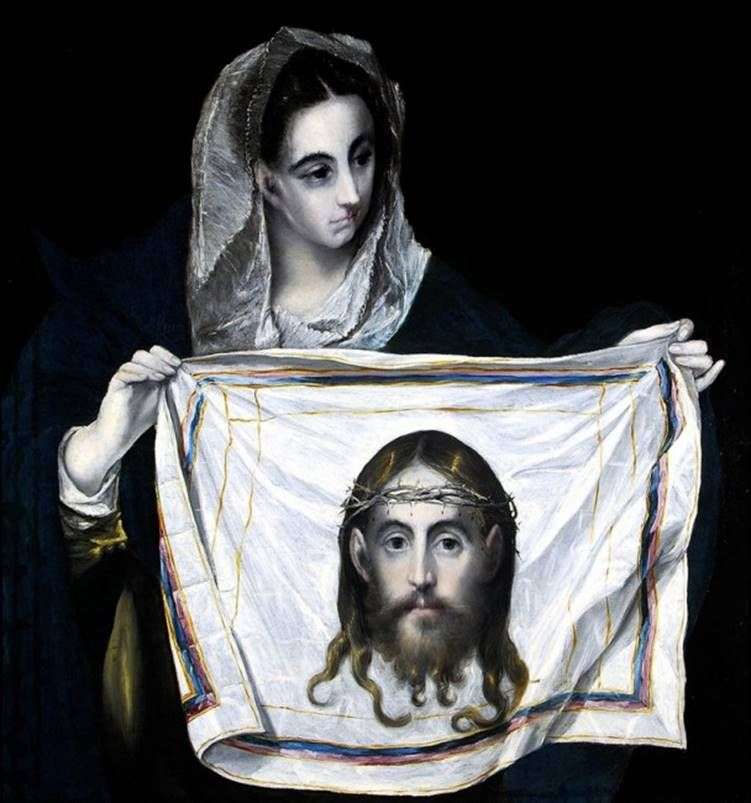 El Greco several times turned to the theme of the sacred scarf. In the painting, written about 1579, the thoughtful gaze of the aristocratic St. Veronica is diverted to the side, which allows the viewer to focus on the image of Christ, imprinted on the scarf, which she shows.

Christ looks directly at the viewer, the features of his face are calm and refined, and not distorted by wounds or pain. Such an idea of the human image of Christ is similar to the majestic, miraculous Spas, an image honored by Orthodox Christians, with whom El Greco, as a Cretan, should have been a sign.

the shroud was a piece of cloth on which the image of Christ was miraculously imprinted, when he brought it to his face, therefore it is believed that she conveys his true features. Both the shroud and the scarf of Veronica were important relics for medieval Christianity, but in painting the image on the scarf is more often represented only by the face of Christ with streams of sweat and blood, which induces the viewer to concentrate on reflecting on the sufferings of Christ taken to redeem the sins of men. SW. VERONICA.

In the apocryphal gospels, Veronica is mentioned as a woman who suffered from bleeding and was healed by touching the edge of Christ’s clothing. It was also known that she had a picture of the face of Christ, which, according to legend, she received, wiping the sweat from his face with a piece of linen cloth, when Christ carried the cross to Calvary: his face was miraculously imprinted on this piece of cloth.

The fabric, called the scarf of Veronica, later found itself in Rome and became an important relic of the St. Basilica. Petra. The name “Veronica” can be considered to have originated from the Latin words faith icons, meaning “true image.” This saint is depicted holding his handkerchief, as in the picture of El Greco, or standing among the abominable crowd that surrounded Christ before his crucifix, standing out with the grace of his appearance, as in the picture of Bosch.