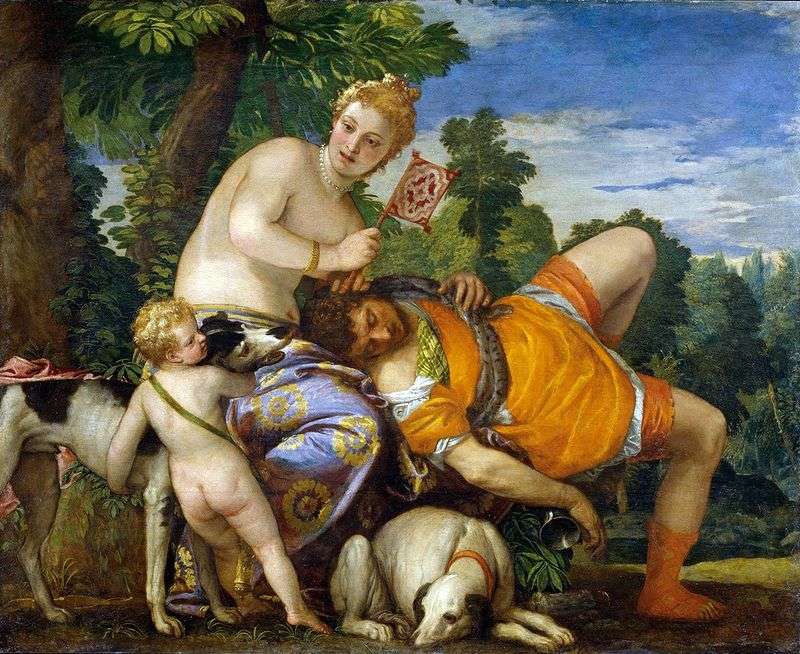 The goddess of love and beauty Venus fell in love with Adonis – the son of the king of Cyprus. No mortal could match his beauty. For the sake of Adonis, Venus forgot the very sky. She stopped dressing nicely and did not live herself as before. All the time she spent with the young Adonis. With him, she hunted in the mountains and forests of Cyprus for hares, shy deer and chamois, but she avoided a powerful boar, bear or wolf. And Adonis asked her to stay away from these predators.

Seldom left the goddess of the king’s son, and leaving him, every time she prayed to remember her request. But one day during the hunt in Cyprus in the absence of Venus, Adonis forgot about her request. His dogs were driven from the thicket to the clearing of a terrible boar, and Adonis threw his hunting dart into it. But the beast was only wounded.

The enraged wounded boar rushed at the young hunter. The unhappy man did not manage to escape. Vepr with his fangs inflicted a deep wound on the boy, he fell to the ground. Venus heard the moaning of a dying man and went to the mountains of Cyprus to look for the body of her beloved boy.

Sharp stones and thorns thorns hurt the tender legs of the goddess, drops of her blood fell to the ground, and from this blood then rose everywhere, lush roses, scarlet, like the blood of Venus. Finally she found the body of Adonis. The goddess was weeping bitterly at the young man, who had died early.

In memory of his beloved Venus mixed his blood with divine nectar and turned it into a red, like a blood, flower. And she called him Adonis – the time of his blossoming is just as short as the life of the beautiful Adonis.