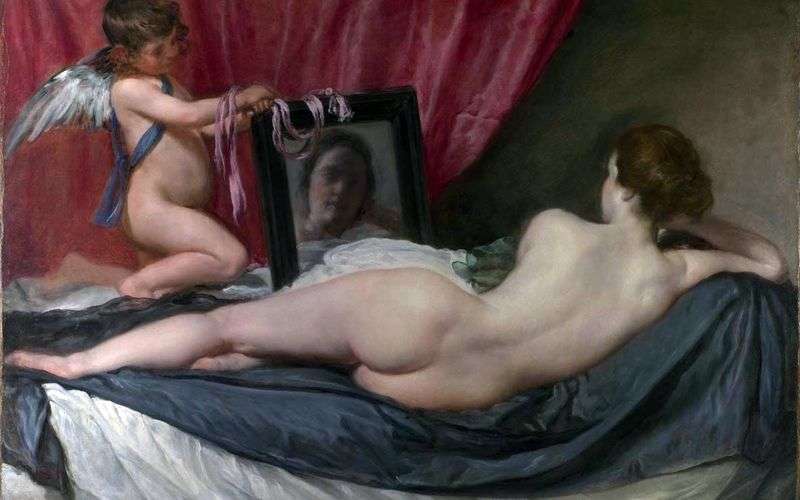 The presented work is the only picture of Diego Velasquez, on which a nude female figure is depicted. This is due to the sharply negative attitude of the Spanish church towards such images. However, in the royal collection there were many similar works on mythological subjects, for example Titian and other Renaissance artists. According to the documents it is known that Velasquez wrote several other similar paintings, but they did not survive.

Venus, the goddess of love, was the most beautiful goddess of the ancient world and was considered a personification of female beauty. The painter showed it with his

son Cupid. He holds the mirror so that she can see both herself and the one who beholds it. This method a century before Velazquez invented Titian specially for the image of the goddess, she also represented with Cupid.

For the first time the painting is mentioned in 1651, as it is stored in the collection of the young son of the then Prime Minister of Spain, famous for his love and patronage of art. Subsequently, he became the Marquis del Carpio and the viceroy of Naples.

This status allowed him to order such paintings, without fear of persecution of the Inquisition. In the house of the Marquis, the work hung along with a Venetian painting of the 16th century, depicting a naked nymph. In a word, “Venus in front of the mirror” remained unique in Spanish art until the appearance of “Macha nude” by Francisco Goya, inspired by the masterpiece of Velasquez.

The picture “Venus in front of a mirror has” and other names. The work is known under the names “Toilet of Venus” and “Venus And Cupid.” In the National Gallery in London, it fell in 1906 from the English estate Rockeby Park in the County of Yorkshire, so it received another name – “Venus from Rockeby”. Specialists of the Gallery believe that Cupid and the face of Venus in the mirror were rewritten in the XVIII century.