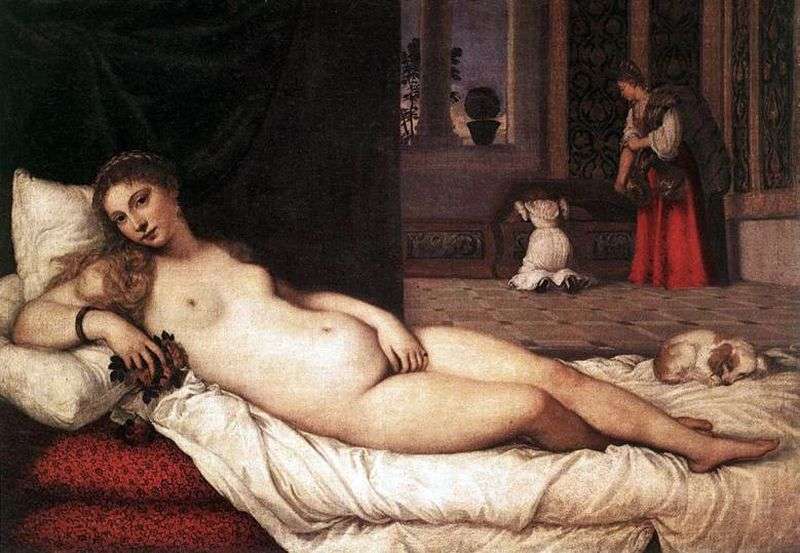 In the foreground of the painting in the luxurious interiors of the palace shows a reclining nude young woman who was identified with the goddess Venus. It is only a few ornaments – a ring, bracelet and earrings. Outdoor view of women is aimed directly at the viewer. In his right hand holding flowers Venus, her left hand covers the bosom, forming the center of the picture composition. Venus is sleeping little dog leg. In the background picture on the right shows the two maids, busy trunk with clothes.

There are different versions of interpretation of Titian nude beauties. According to one of them, the picture symbolizes the bonds of

marriage. Chest clothes in the background is regarded as a dowry to the girl naked. Other researchers believe that the “Venus of Urbino” – a portrait of a courtesan, in fact offers itself to the viewer. Perhaps Titian wanted to tell in his picture of sexuality in marriage, combining thrilling eroticism with the virtues of marriage and above all with the fidelity that depicted in the picture represents the dog.

However, the aesthetic ideals of Renaissance paintings allow you to see nudity in “Venus of Urbino” and a perfect theme. Naked woman naked man along with purchase in Italy XV – XVI centuries to the artistic norms. Nudity is not perceived as an image of the person from which divert clothes. The nakedness of artists see the natural state of man, his artistic idea.

Nudity as the embodiment of moral purity, chastity is opposed to the truth of the Renaissance artists of dress as “naked truth” – “truth decorated.” The possibility of such sublime thematic reading “Venus of Urbino” is created, and some features of its pictorial composition: “Venus, as it were separated from the space of the room, so that it exists in a special world, where the boundary of the ideal and the real is shaky.

In Titian woman holding a rose, is considered a symbol of Venus. Whoever was a woman: Venus or donna nuda, her body reflects the ideal of beauty and the erotic is a symbol of high Renaissance. The high forehead, which was considered a symbol of beauty in the Middle Ages, for which the women plucked the hair on his forehead, has ceased to be ideal. Now hair framed the face, softening his features. The favorite color of hair did not dark like most Italians by nature and light. Almost all mythological figures depicted by artists of the Italian Renaissance, had blonde hair. Chest considered beautiful if it was a small, round and firm.

Titian painted woman belly slightly rounded. On the Gothic paintings of women depicted bellies usually more prominent. The Renaissance painters abandoned this practice and sought a more natural shape. Nevertheless, the abdomen is still considered the center of the female body, a symbol of fertility and procreation.

The “Venus of Urbino” found their complete reflection of all the features of Titian’s painting. In particular, hair, skin, fur, colors, fabrics and precious stones transferred to the artist, natural, close to the optical illusion. This means an aesthetic as well as sfumato surrounding the body of a woman, Titian shows the audience a high level of artistry.

In addition to the magnificent paintings on religious themes Titian wrote a large number of portraits of both historical persons and unidentified characters. A number in the works of Titian make poluportrety unknown women, in which Titian symbolic language is about the power of women’s attractiveness. Among depicted portraits of women could be and Venetian courtesans, who in the XVII century. held a high social position.