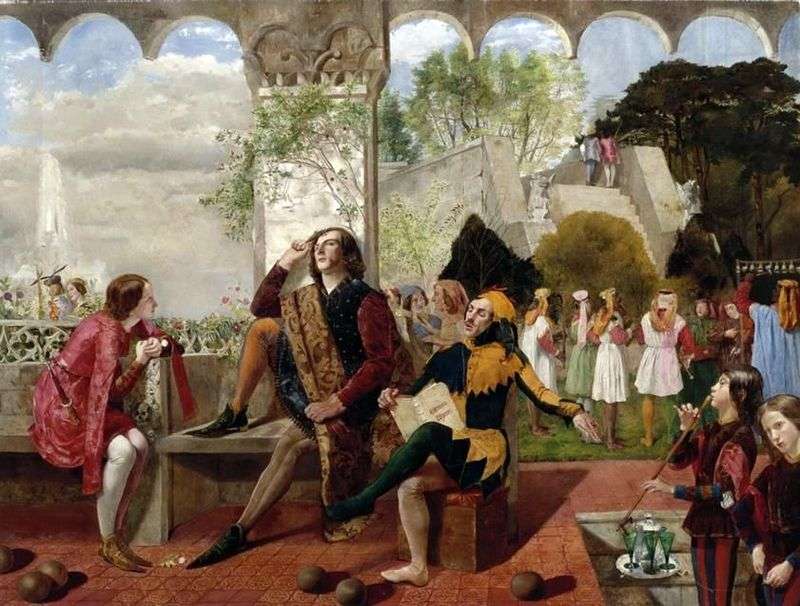 “The Twelfth Night” was written in the autumn-winter of 1849 and exhibited next spring at the National Institute, in the water hall with the painting “Essay Ancilla Domini!” Rossetti. Although Deverell was never formally a member of the Pre-Raphaelite Brotherhood, he was an integral part of this circle, sharing their goals and interests – according to the Literary Gazette, “creating kaleidoscopically colorful” compositions on Shakespearean themes and jokingly reproducing the motifs of Middle Ages art. In the picture, these motifs were reflected in the bright costumes of two pages in the lower right corner, behind which a black musician with bells can be seen transferred to a canvas from a 14th century manuscript.

The frozen triangular group of the main characters is strikingly reminiscent of the composition of Hunt’s painting “Valentine Saving Sylvia from Proteus”, which, in turn, may have been influenced by the hieratic composition of the “Triptych with Two Saint Johns” by the Flemish artist Hans Memling, whom Hunt saw in Bruges. Deverell also assimilates the practice of Pre-Raphaelites – using friends as models. The artist, known for his pleasant appearance, portrayed himself as suffering from the hopeless love of the Duke of Orsino. Rossetti Posing for the Festa buffoon. With Elizabeth Siddahl, who first appeared as a model for the Pre-Raphaelite painting, Deverellle wrote to Viola, disguised as a page by Cesario.

Deverrell specialized in Shakespearean stories, being a good amateur actor. His painting, dedicated to the fourth scene of the second act of “Twelfth Night”, reflects a deep understanding of the subtleties of the plot and characters. Orsino, exhausted by an unrequited love for Olivia, lazily sits on the terrace, between the buffoon who sings “Come, fly, death.” The external harmony of what is happening is disturbed by the expressions and poses of the protagonists, who deliberately avoiding the majestic rhetorical gestures associated with the theatrical performance, reveal their inner feelings and aspirations.

Feste mockingly replicates the pose of the owner, who sits, melancholy leaning back and twisting a lock of hair. Bending his head to one side, Orsino avoids the gaze of Viola, who sits modestly and patiently, “as a monument,” enchanted by the presence of the duke. The genuine feelings of the heroine are hinted at by the rose she is holding, the passionflower on the balustrade, the red hair, the color of the clothes and the purple sheath on her hip. Viola leaned her elbows on a bench decorated with a carved image of a skull surrounded by a garland of roses. It is a symbol of the transience of love and bodily beauty, that is, the leitmotif of the play.

Although the action under the arch of the proscenium is depicted, the combination of various elements confuses the view. The column on which Orsino rests is located in front, as if not far from the viewer. The wall with the stairs suddenly breaks off, and the figures standing directly behind Orsino and Festa seem too large, especially when compared to the musicians on the left.

Thus, the background plays a dual role of real space and theatrical backdrop, an illusory background for the difficult situation played out in front of the viewer. Perhaps the most eccentric element of the composition is two pages, standing at an indefinite level on the right. The boy closest to the viewer carelessly twists the button on the thread, and this original stroke embodies the idea of a frozen moment.