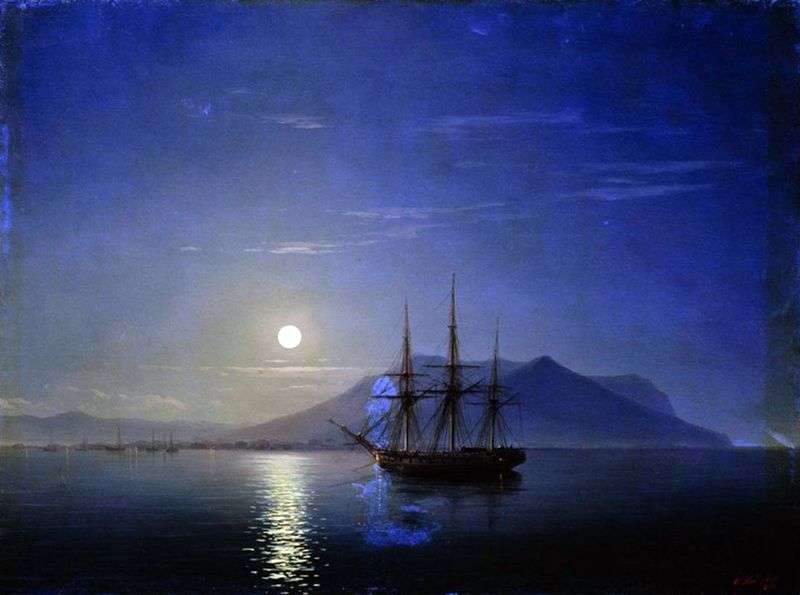 The painting “A sailboat off the coast of Crimea on a moonlit night” is painted with oil paints on canvas by Ivan Konstantinovich Aivazovsky in 1858. By this time the greatest seascape painter has lived in Feodosia for more than ten years, where, with money earned from the sale of his paintings, he opened an art school, which later brought fame to Novorossiysk province and became one of its artistic centers. In the middle of the composition is a three-masted sailboat.

The sea without traffic, calm, quiet, not foreboding storms – only a slight oscillation of the water surface, which gives out life in it. On the ship, sails are lowered. He, like the sea, is immovable. It seems that nature and man no longer compete with each other, but, on the contrary, merge into one.

The static nature of the picture is emphasized by the mountain range located in the background – right behind the ship. Mountains that destroy the linearity of the horizon, as it were, say that not everything in the world is so simple and smooth, even if at first glance it looks exactly like that.

The colors in the picture are all shades of blue: from gently blue to almost turning into black, almost resinous. What is surprising, the variety of shades of the same color, symbolizing the sensual side of life of all things, bring to the viewer a simple truth: love has many facets, regardless of whether a person is capable of perceiving them or not. At the moment the painting is kept in the State Museum Association Art culture of the Russian North.