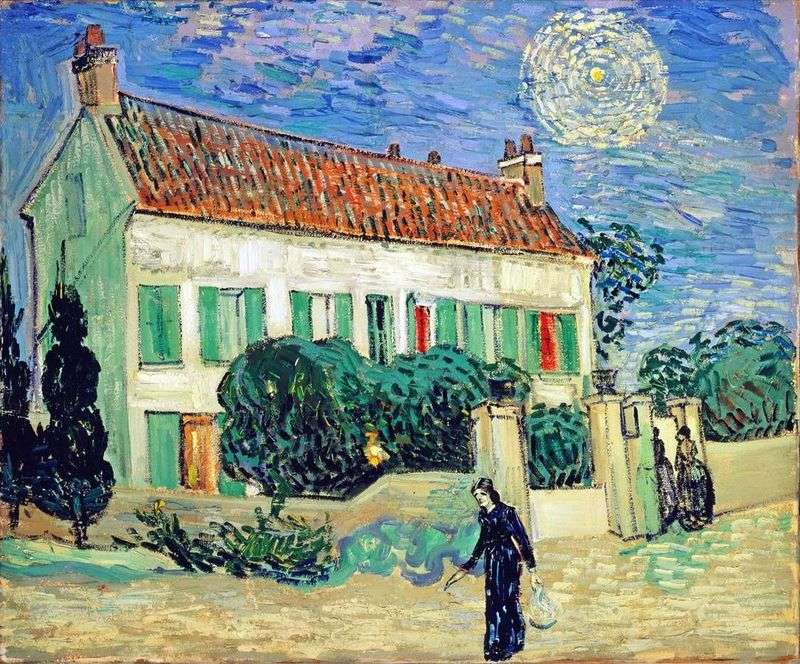 In Over Van Gogh comes with hopes of recovery and a new life. This is reflected in the canvases executed in May 1890.

During this period, the artist often wrote landscapes with houses. The house was a symbol of warmth and security for Van Gogh, the artist turned to this motif throughout his creative life. However, already in June 1890, the emotional coloring of the artist’s canvas begins to change, heavy notes of gloomy forebodings appear, which alternate with moments of appeasement.

The painting “The White House at Night,” written in the first summer month after moving to Over, is full of conflicting feelings. The artist depicts a house of white stone against the background of the twilight sky, adorned with a large star, painted in a typical Van Gogh manner. The author successfully conveyed the atmosphere of a small evening town.

The tranquil lines of the composition, a woman walking leisurely along the road, a soft combination of pastel shades create a mood of calm that the artist may have tried to convey. However, in the manner of performance, dominance is dominated by chaos, combined with uncertainty and anxiety.

It is known that after the Second World War the picture was considered lost. Only in 1995 it was exhibited in the Hermitage at an exhibition of works of art captured by the Soviet Union at the end of the war.